This is the 5th part in my ongoing series about converting the single-bit data stream of a PDM microphone into standard PCM samples. Check out the the References section below for the other installments.

Earlier, I already discussed how to design generic FIR filters. In this installment, I impose some restrictions on the filter, which makes them less generic, but we get something very valuable in return: an almost 50% reduction in the number of multiplications!

The plots below were all generated with Numeric Python scripts. You can find the code here.

What is a Half-Band Filter?

According to Wikipedia, “a half-band filter is a low-pass filter that reduces the maximum bandwidth of sampled data by a factor of 2 (one octave).”

When we start out with a sample rate Fs, the bandwidth of that signal goes from 0 to Fs/2. A half-band filter is used to reduce the bandwidth to Fs/4.

By itself, this is nothing special: you could do that with a generic FIR filter.

Here’s an example of some random half-band filter:

And except for the center coefficient, all odd coefficients are indeed 0.

Half-band filters are extremely useful in decimation filters. But before getting into that, let’s first see how to design them.

You can easily design your own half-band filters with pyFDA.

When I wrote about pyFDA in a previous blog post about how to design a low pass FIR filter, I specified a desired pass band and stop band attenuation, let pyFDA figure out all the rest, and had it come up with the order of the filter and associated tap coefficients. What happens behind the scenes in that case is the following: pyFDA uses the standard Parks-McClellan filter design algorithm which is a variation of the Remez exchange algorithm, an iterative way to find approximations of functions.

In the case of half-band filter, the ripple for the pass-band and the stop-band has to be the same to achieve symmetry. Consequently, the weighting factors must the same as well. The end result is that there is really only 1 factor to play with if we want a certain filter performance: the order of the filter.

In pyFDA, we can calculate a half-band filter as follows: 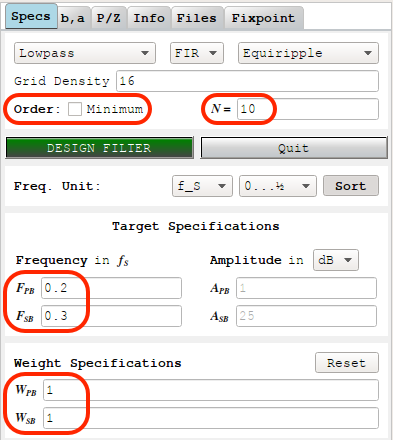 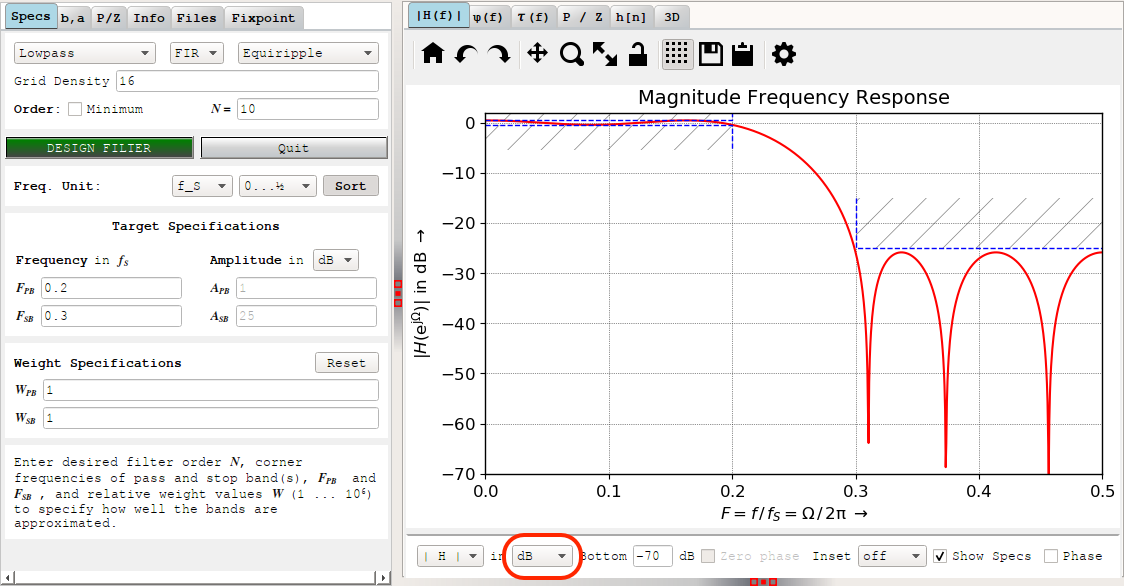 If you’re wondering why this doesn’t look symmetric at all, change the units from dB to V, you’ll be greeted with this: 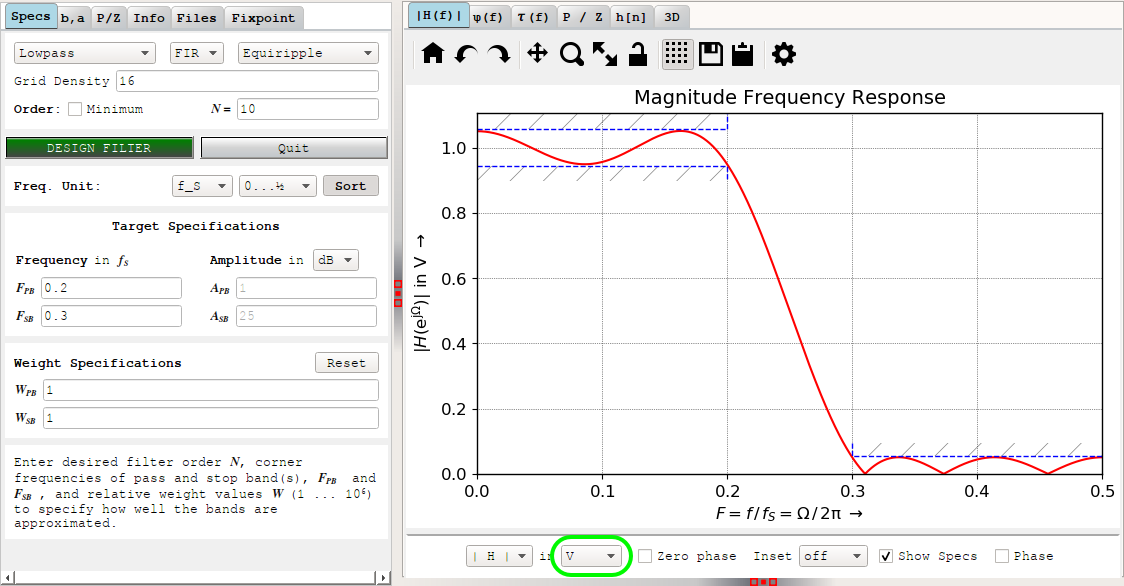 Click on h[n] tab in the right pane for the filter coefficients: 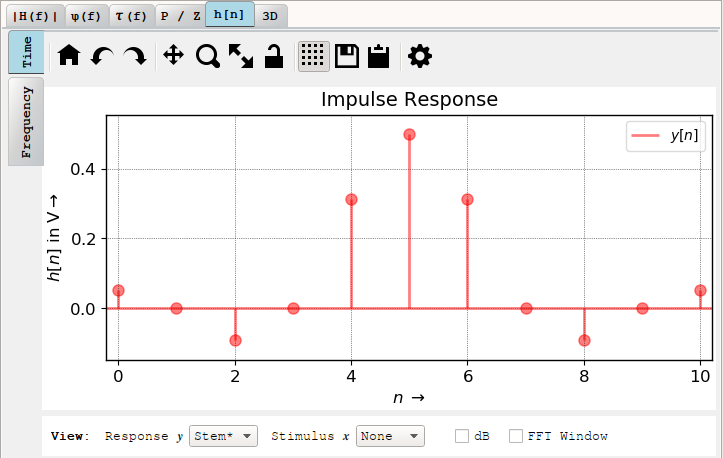 And, again, except for the center tap, 50% of the coefficients are 0.

Or are they? When you click select the b,a tab in the left pane, you get the coefficients listed in floating point format: 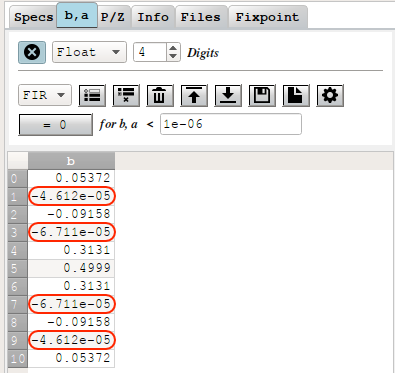 The coefficients are very close to but not quite 0. You can easily fix that by just clamping these coefficients to 0, but that doesn’t feel right, does it? For high order half-band filters with a high attenuation, this will almost certainly change the performance characteristics in some subtle way.

There must be a better way to go about this!

Today, the Parks-McClellan/Remez algorithm to calculate FIR coefficients is fast enough even for very high order FIR filters. Even when implemented in Python.

This was definitely not that case in 1987. Back then, Vaidyanathan and Nguyen observed in A “Trick” for the Design of FIR Half-Band Filters that you can reduce the number of coefficients to calculate by (almost) 50% by transforming the half-band filter specification into a different FIR filter.

You’ll have to read the paper if you want to understand the details (it’s not super complicated), but the procedure is very simple.

Given a half-band filter specification with the following parameters:

Design a regular FIR filter with these parameters: 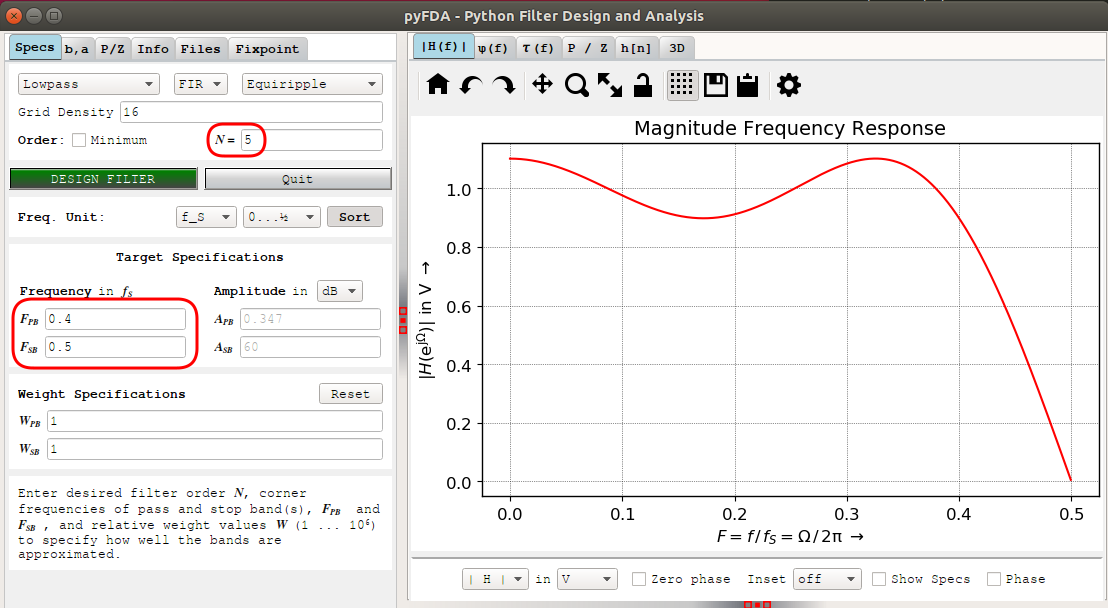 The stop band is gone now, but the pass band behavior of the magnitude frequence response graph has the same shape at the previous one.

And here are the coefficients: 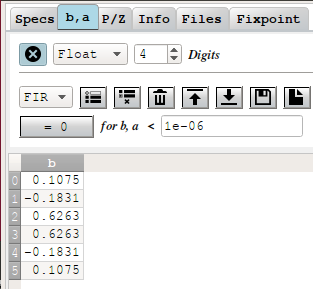 There are no zeros anymore, and values are exactly double of the non-zero coeffients of the values that were calculated without the trick! E.g. coefficient zero is 0.1075 vs 0.05372 earlier.

All that’s left now to get the half band filter coefficients is to divide the numbers above by half, insert a zero between each coefficient, except for the center coefficient which needs to be set to 0.5.

Just like generic FIR filters, I prefer a filter design script over a GUI. The code uses the trick and is straightforward:

To find the minimal filter order that satisfies both pass band and stop band attenuation, just increase the filter order until that condition is valid:

The code above is available on GitHub.

With the design details out of the way, it’s time to understand why half-band filters are particularly useful for decimation filters.

Let’s first get out of the way that, even more than CIC filters, half-band filters are actually terrible when used stand-alone. This is because the attenuation of the filter at Fs/4 is by definition pegged 0.5 or -6dB. In a single stage 2x decimation filter, the stop band starts at Fs/4, so unless -6dB happens to be satisfactory for your design, a half band filter is out.

That’s why half-band filters are always used in multi-stage decimators.

Let’s show how that works with an example. In the figure below, I start out with an initial sample rate of 288kHz or a bandwidth of 144kHz, which I want to reduce to a sample rate of 48kHz, a factor 6x decimation. The signal of interest resides in the 0 to 10kHz spectrum, the pass band.

In a single stage implementation, I need an FIR filter with a pass band from 0 to 10kHz, and a stop band from 24kHz to 144kHz. The problem with that is that the transition band from 10kHz to 24kHz, 14kHz, is 1/10th of the overall bandwidth. Small ratios like this result in steep filters, and a large number of filter coefficients.

It’s better to split this filter into 2 stages: a 2x followed by a 3x decimation filter.

If we’d design the 2x decimation filter as if it were a single stage filter, we would put the end of the pass band at 24kHz, and put the start of the stop band to 72kHz. This ensures that the frequencies above 72kHz don’t alias into the remaining spectrum after decimation.

But that’s more than we need! In reality, we only need to make sure that the spectrum between 120kHz and 144kHz doesn’t alias onto the 0Hz to 24kHz. The part between 72kHz and 120kHz will alias to region between 24kHz and 72kHz, but we can remove that in the second filter.

What we end up with then is a passband from 0 to 24kHz and a stop band from 120kHz to 144kHz. Not only is this a very large transition band that requires far less filter coefficients, but we have symmetry: we can use a half-band filter and reduce the number of coefficients almost by half!

After the 2x decimation, we stil need the 3x decimation filter, but one that is half as steep as before, with the input sample rate half as well.

Let’s add a 0.1dB pass band and 90dB stop band requirement, and see how that works out in practice.

For a single stage 6x decimation filter, we’d end up with an FIR filter of order 80, resulting in:

We’ve reduced the number of multiplications by ~20%. That’s good, but it’s not spectacular. However, that’s because the overall decimation ratio is relatively small. We can see that the number of multiplication needs for the final FIR filter is almost 50% of what it used to be. Whether or not this 20% reduction is worth the complexity of having 2 stages vs just 1 will depend on the application.

For higher decimation ratios that contain multiple factors of 2, the following will happen:

In my previous blog post, I specified a PDM data rate of 2304kHz and an output PCM sample rate of 48kHz. I choose that ratio of 48 specifically because 48=3*16, which means that, if I want to, I can reduce the sample rate by a factor of 16 using nothing by half-band filters. (In practice, the initial decimation will be done by a CIC filter, which doesn’t require any multiplications at all, but that’s for later.)

I have now all the components that are necessary to design an efficient PDM to PCM processing pipeline. In the next installment, I’ll bring everything together and I’ll show a concrete implementation.