If you’ve read my previous three posts in this series, you know that I’m improving my general DSP knowledge by applying it to a concrete example of taking in the single-bit data stream of a PDM microphone and converting it into standard PCM samples.

The application itself is only a means to an end. Most important is understanding the why and how of every design decision along the way: if there’s, say, a filter with a 70dB stop band attenuation at 10kHz, I want to know the justification for that.

After diving into CIC filters, the characteristics of the sigma-delta generated PDM signal of a MEMS microphone, and learning how to come up with FIR filter coefficients in general, the time has come to start building up the filter architecture.

And for that, we need to come up with a design specification!

More than ever: take everything here with a grain of salt! And please contact me via Twitter or GitHub if you notice any mistakes.

The problem that I want to solve is to convert a PDM signal to a PCM signal while maintaining the quality level of the microphone.

Going forward, I’ll use the characteristics of the ST MP34DT01-M microphone of my Adafruit test board and let them guide the specifications of the filter design.

ST seems to have left the PDM microphone market, but luckily, Adafruit still carries the datasheet. The most important characteristics are marked in red: 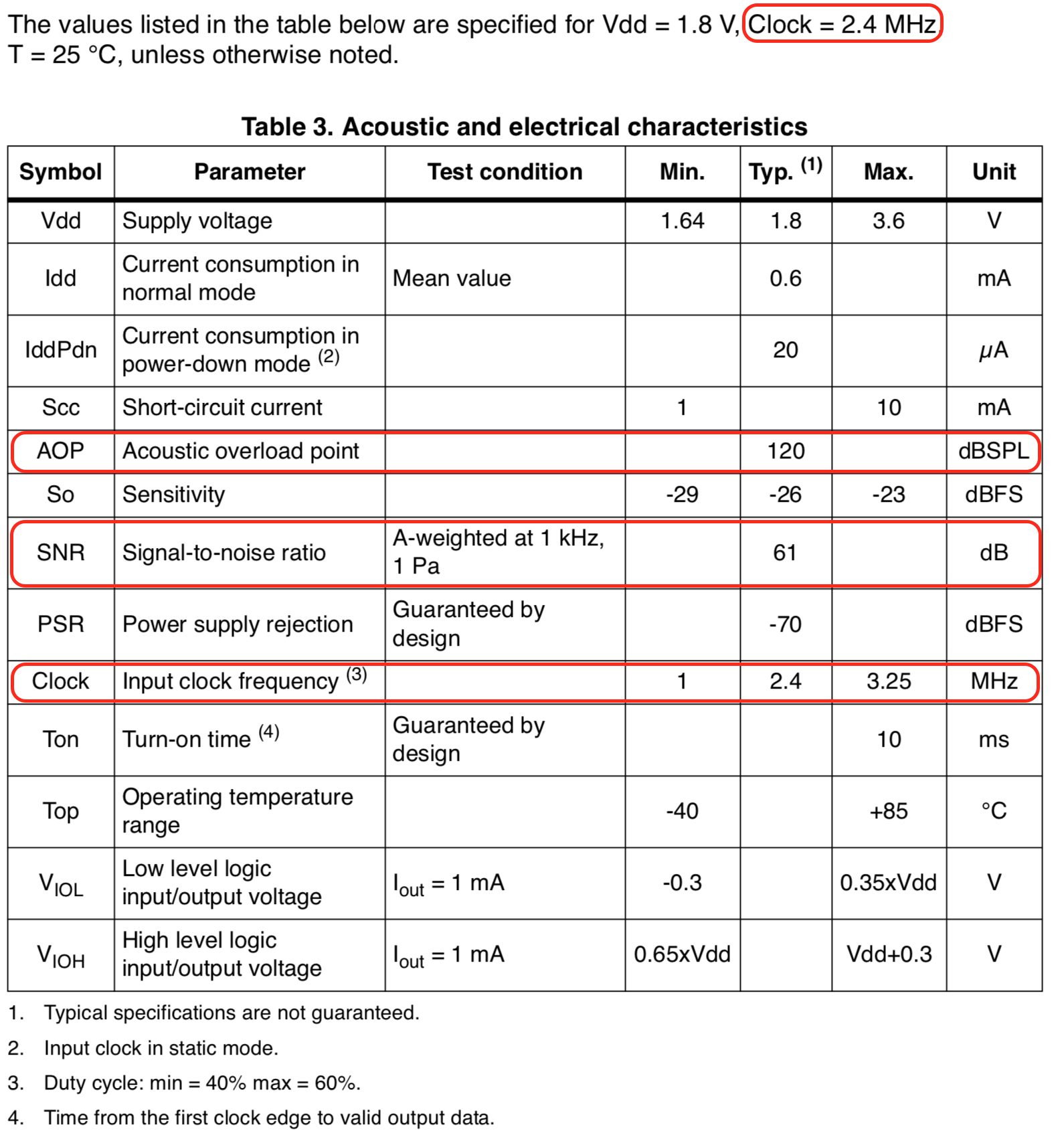 When I see “SNR” and “AD converter”, I think “dynamic range” and the number of bits that I need to make sure that my logic can cover the full signal range: 1 bit is good for ~6dB.

So when the datasheet of my microphone showed an SNR of 61dB(A), I initially assumed that you get what you pay for: a cheap device with crappy dynamic range.

And I couldn’t have been more wrong!

If you want the gory details, you should read the Microphone Specifications Explained application note from InvenSense. Another good (and shorter) document is Infineon’s Digital encoding requirements for high dynamic range microphones, which discusses the relationship between microphone specifications and the word size needed to capture the full dynamic range of a microphone. (Just what I need!)

But I’ll give a very short summary here.

A microphone datasheet lists the loudest 1kHz sine wave that it can more or less reliably record. This is called the acoustic overload point (AOP). A common way to quantify “reliably record” is with a total harmonic distortion (THD) of 10% or less.

Our microphone has an AOP of 120 dbSPL, where dbSPL stands for decibel sound pressure level.

According to Wikipedia, 120 dbSPL is about as loud as having the bane of the 2010 World Cup, the vuvuzela, screaming at you from a 1m distance. 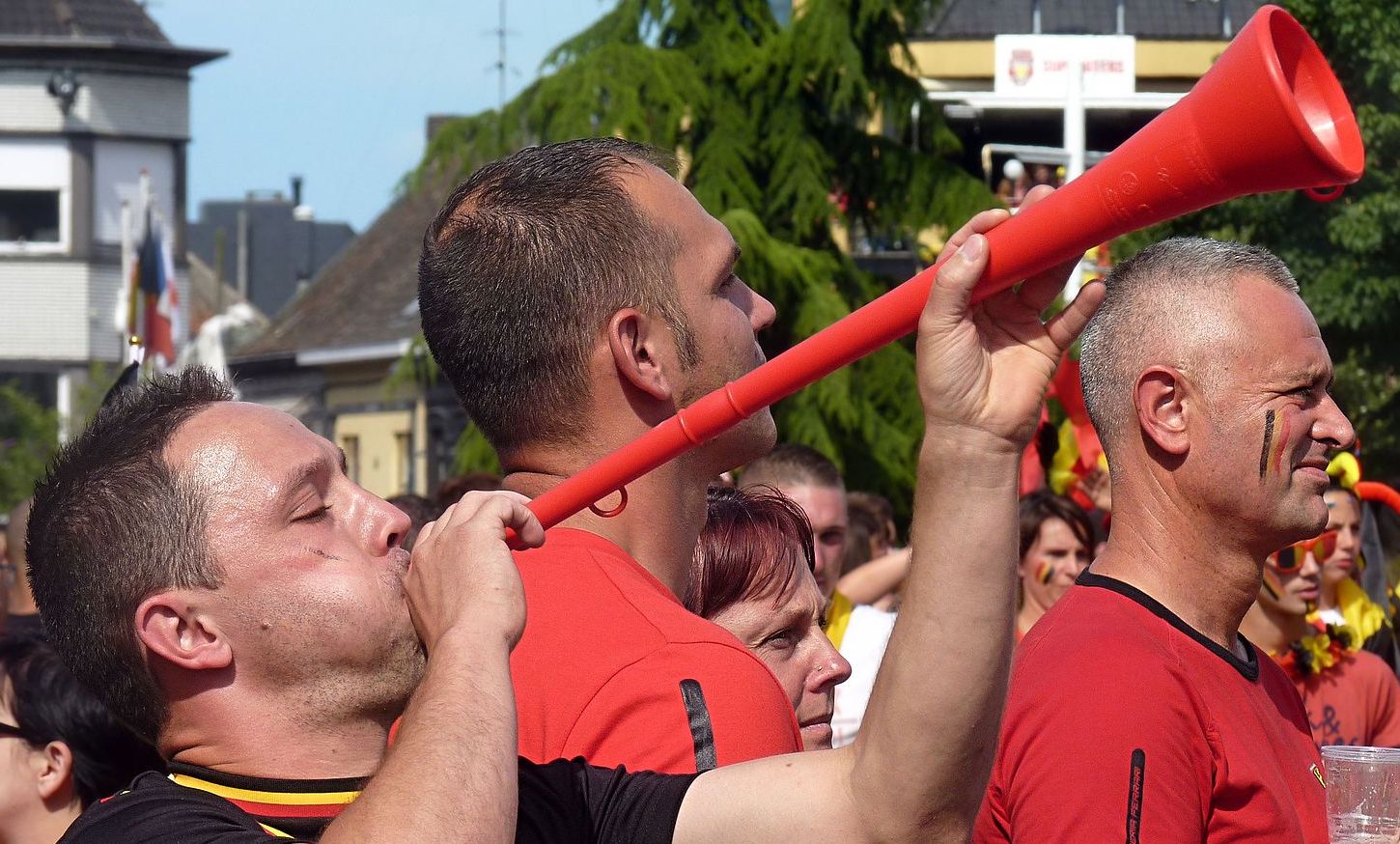 The digital output of a microphone should be at maximum at the AOP. This is full-scale value. All other sounds (with some exceptions) will result in a lower digital output value. The unit to measure this is dbFS, decibels relative to full scale. At the AOP, dbFS is 0. All other levels have a negative dbFS number.

The signal to noise ratio of a microphone quantifies the internal noise of the microphone, and thus the boundary for which sound can be recorded.

The SNR measurement goes as follows:

The dynamic range of the microphone is the SNR plus the difference between the AOP and 94dbSPL.

At ~6dB per bit, our design will need a PCM word size of at least 15 bits to cover the full dynamic range of the microphone. The desired dynamic range also impacts the performance parameters of the filters that are needed for PDM to PCM signal conversion.

We can finally move on the requirements of our design:

I already wrote about the Basics of Decimation earlier, but didn’t mention one of the most important parts:

In the example below, you can see what happens when you keep the stop band attenuation of a decimation filter the same for different decimation ratios:

Once noise ends up in the frequency range of the signal of interest, it can never be removed.

Let’s now work the numbers for our microphone case.

Do we really need a complex filter architecture to convert PDM to PCM? Maybe a single equiripple filter is sufficient for our needs?

Let’s just fill in the numbers, run the remez algorithm that was discussed in my previous blog post, and see what happens:

After more than a little while, it comes up with a filter that has 2216 taps, and the following frequency response graph:

Since this is a decimation filter, we only need to evaluate it for each output sample.

The number of multiplications per second becomes:

That’s a lot, but that’s good if you’re looking for a baseline and want to impress people about how you were able to optimize your design!

Note that even if the remez function seems to have found a solution, upon closer look, the result looks suspicous: the very first coefficient (and the very last one, since it’s symmetric) have a weird bump.

I suspect that this due to rounding errors. So even if you can stomach the 110M multiplications/s, chances are that the result won’t be right. (I didn’t pursue this further.)

We have finally have a design specification and can now start looking at practical design implementations.

A naive first try at solving everything with a single filter didn’t work out, but there a lot of ways to optimize the design into something that will work.