In my earlier post, I introduced my ‘new’ Tektronix TDS 420A oscilloscope, which I bought to add Tektronix support to glscopeclient. 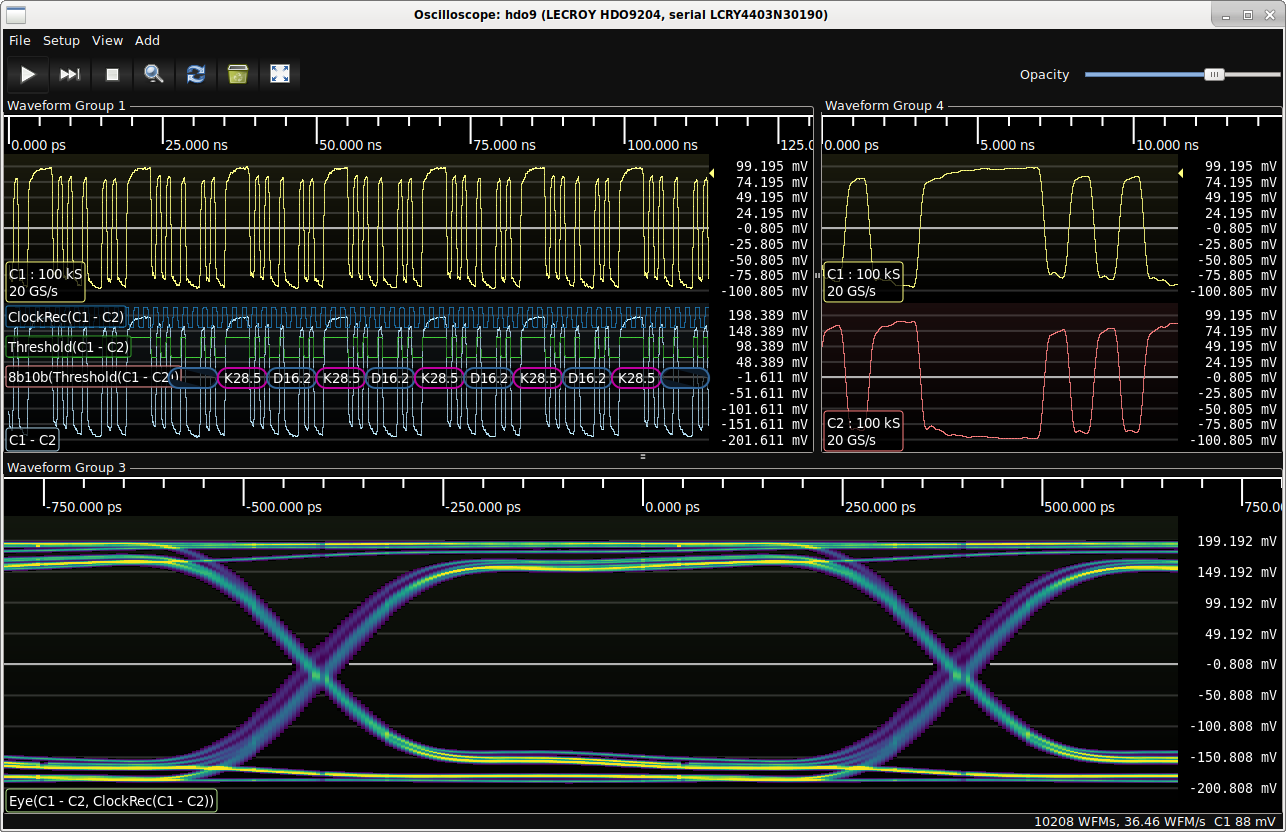 The first step in that process is to get my PC to talk to the scope through the GPIB interface.

It’s not a complicated process, and there’s quite a bit of information online that describes how to do this, but in this post I go through the gory details how to get from nothing to fetching recorded waveforms from the scope onto your PC.

From unpacking the scope, it only took about 30 minutes and 95% of that time was obviously spent getting Linux drivers right.

Acquiring a USB to GPIB Dongle

GPIB is an obsolete interface standard. Modern test and measurement equipment comes with an Ethernet and/or a USB port. But not too long ago, virtually all equipment had GPIB support, and thus most of the older equipment you’ll buy second hand on eBay will come with one too.

The sturdy, specialized GPIB connector itself was already quite expensive back in the day, so a full GPIB interface card or dongle was never cheap.

You can find UGPlus USB to GPIB controllers for around $40 on Amazon, but they aren’t supported on Linux.

The cheapest Linux supported option that I could find was an Agilent/Keysight 82357B. They’re listed for $624 on the Keysight website, but you should be able to find one for ~$70 on eBay or AliExpress.

Not wanting to wait for weeks for a shipment from China, I bought a National Instruments GPIB-USB-HS instead. Instead of the $1059 list price, I got mine for $100 on eBay. 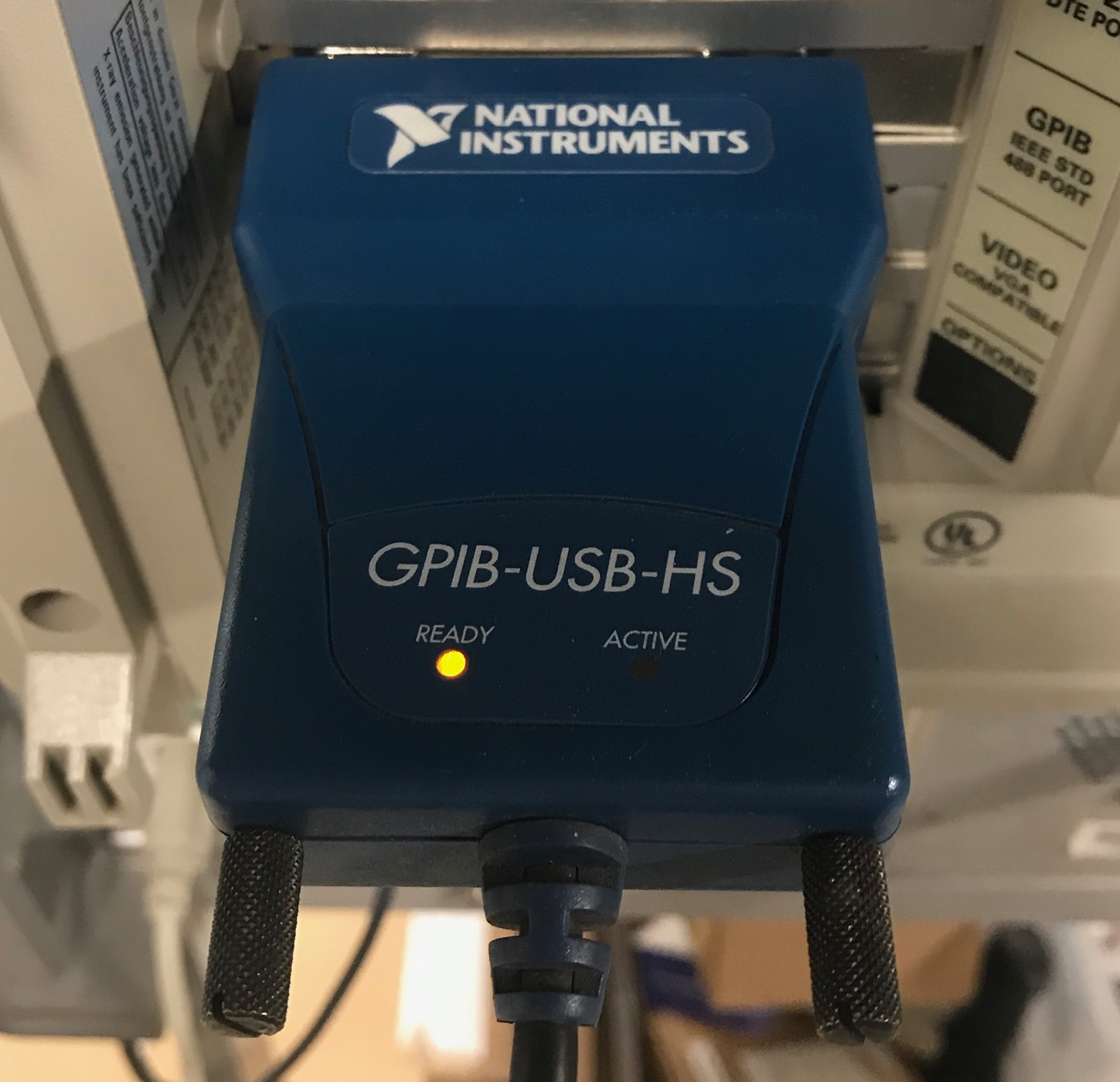 It’s hard to believe, but despite supporting pretty much any kind of device imaginable, the main line Linux kernel doesn’t have any support for GPIB interfaces.

Luckily, there is the Linux GPIB Package which contains driver modules for a variety of such interfaces, as well as whole bunch of user mode libraries and test programs.

One major downside of the method described below is that you need to recompile and reinstall the driver whenever there’s even a minor update of the Linux kernel. It’s not a lot of work, just a very annoying distraction.

Here’s the recipe that worked for my Ubuntu 18.04 distribution:

The National Instrument GPIB USB dongles have small microcontroller on them that needs its own firmware. This firmware must be loaded into the dongle before the dongle is able to behave as a GPIB interface. The firmware, and the utility to load it into the dongle, is part of the same Linux GPIB package that also contained the kernel above.

I used the following recipe:

Set the GPIB Device Address on the TDS 420A

The GPIB protocol supports up to 31 devices on a single daisy chained cable. But there’s no plug and play here, the address of each device needs to be assigned manually. 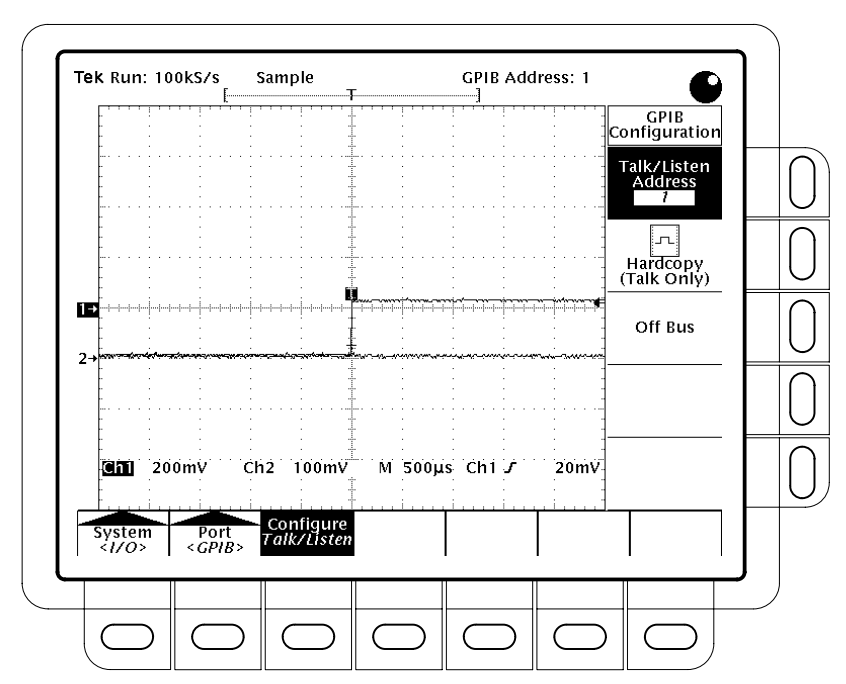 We can now finally test the whole connection.

The Linux GPIB package comes with a number of utilities, one of which is ibtest. Let’s give it a try:

udev rule set user permissions and can do all kinds of funky stuff behind the scenes.

It took me ages to get things working, and reloading the rules with sudo udevadm control --reload was not sufficient: a reboot was necessary!

You will need to change GROUP="tom" to something else.

Earlier, we called sudo gpib_config to load the GPIB-USB-HS firmware into the device. The second in the udev parameters above now does that automatically as soon as you plug in the GPIB dongle in the USB port.

Reboot your machine, unplug the USB cable of the dongle and plug it back in, and try out ibtest, but this time without prefixing it with sudo.

Does it work? Congratulations! You’re ready to start fetching waveforms from the scope!

Fetching a Waveform - The Bare Minimum

We’ll be using pyvisa, the Pyton API for instrumentation that I introduced in a previous blog post.

Fetch waveforms is just a matter of sending the right command query to the scope. Check out of TDS Family Programmers Manual for a comprehensive list of all the commands and how to use them.

It can be as simple as this:

The output of this program could be something like this:

A discerning reader will see a square wave in the data above!

Fetching and Plotting a Waveform

The problem with the example above is that a Tektronix scope has many different settings that will influence how the data is returned.

For example, the returned waveform data starts with :CURV, a redundant repeat of the query command. The waveform values are returned in ASCII text format, as a command separate list etc. Your scope might have been configured to return waveform data as signed 8-bit integers, or maybe even signed 16-bit numbers.

Your code will be very brittle if you rely on these kinds of settings, so it’s better to tell the scope exactly how you want the data to be returned.

The start is the same:

Specify the way the data will be returned:

Let the scope record the data:

Plot the waveform on the screen:

If everything went well, something like this should appear on your screen: 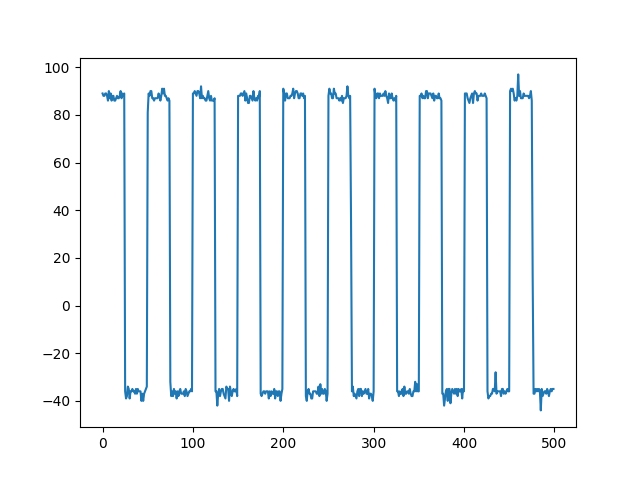 This example still leaves a lot to be desired: it simply graphs integer numbers instead of converting sample values to voltages, the X-axis unit is sample number instead of time.

The WFMPRE? command gives you all the information to do this right, but that’s left as an exercise for the reader.

The main goal has been achieved: we can fetch data from the scope to the PC and do something useful with it!

The GPL3 License of the Linux-GPIB Package

It’s important to point out that the user mode libraries the Linux GPIB driver are licensed under the GPL 3.0. The consequence is that projects with a less restrictive open source license can’t just be built with the Linux GPIB library without applying the GPL 3.0 license to the whole project.

There is a good discussion about this here on Stackoverflow.

For my purposes, this isn’t a huge deal: instead of writing a C++ GPIB backend for scopehal/glscopeclient, I will write a TCP/IP to GPIB server instead. glscopeclient already has a TCP/IP socket based transport driver, so by using such a server, no additional transport driver would need to be written.