Nothing super noteworthy here. I plan to do a bunch of little projects with this, so this serves as the introduction, and as a place to list reference material: links to documentation, videos, etc. posts, …

I’ve been playing around with the code of glscopeclient lately, and I wanted to fix a major gap in the list of supported equipment: Tektronix oscilloscopes.

I can’t say that there was really urgent need for it, but let’s justify it by the fact that I’ve been using Tektronix scopes at work, and maybe, one day, I’ll need the kind of processing that glscopeclient provides?

Another driver was the fact that I suspected that a Tektronix scope would be better at handling data transfers than my Siglent oscilloscope which spends 80% of the time on preparing the data for transmission and only the remaining 20% on the transmission itself.

I had a look at the Tek programming manuals, and over the years, nothing much has changed in terms of SCPI command set. So the idea was: make it work on something old, and it will probably magically work on something new as well.

My requirements were simple:

I had already been monitoring eBay for cheap Tek scopes, when I noticed this one: 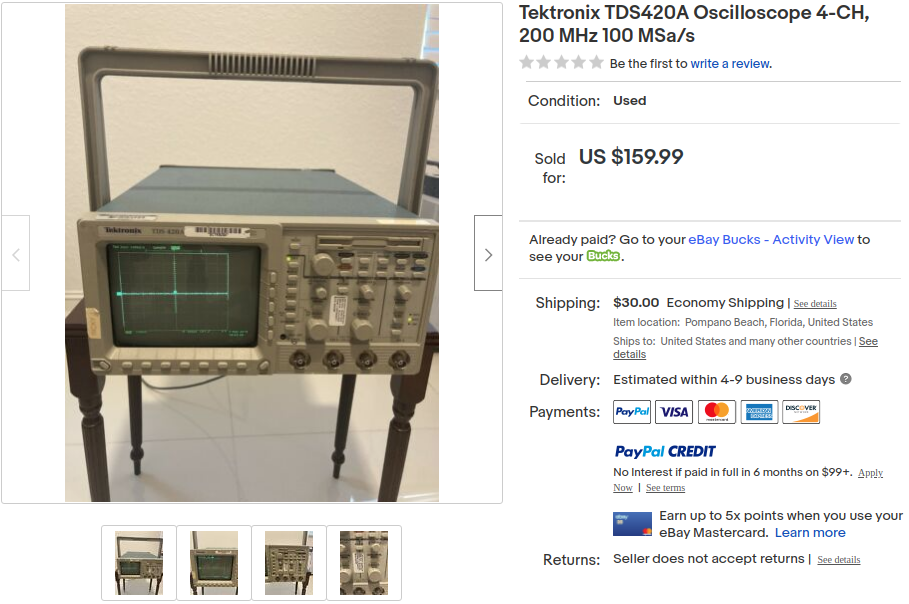 The Internet is full of stories of people who were able to find $50 bargains of allegedly broken scopes that worked with only a bit of work, but $160+30 shipping is really not a bad price for a scope that’s not only listed as working, but one that had been calibrated only little more than a year ago! 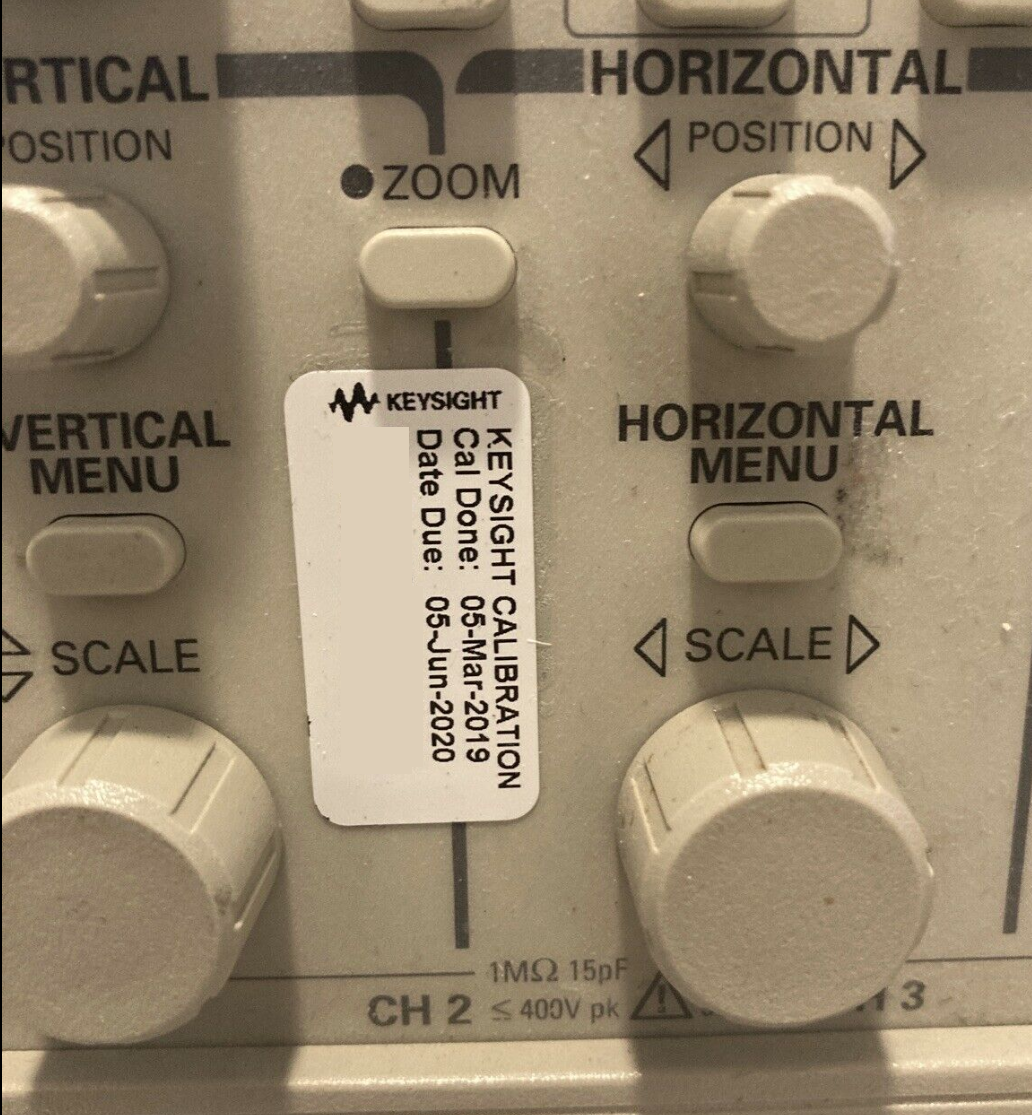 A week later, the goods arrived. 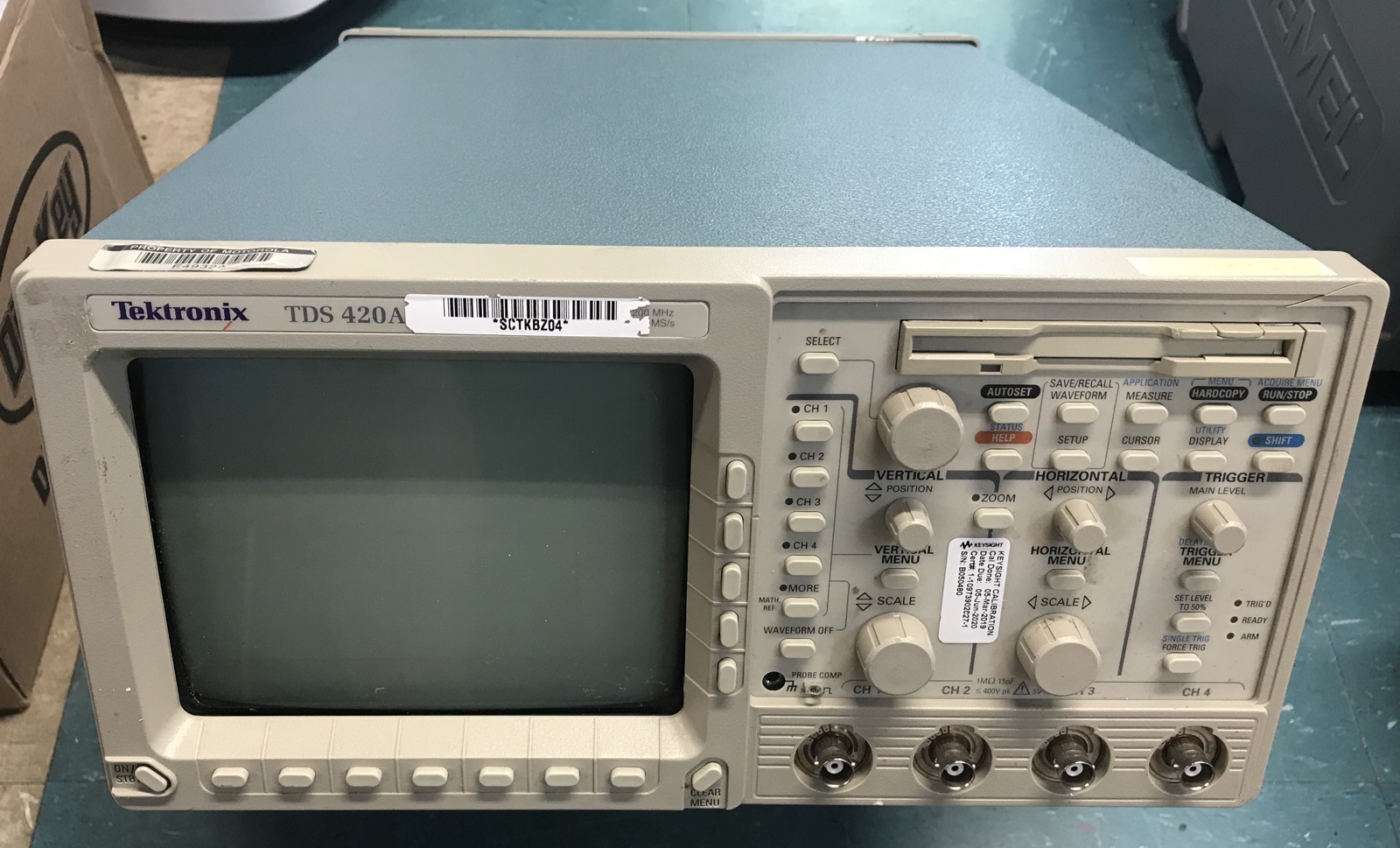 It still had the “Property of Motorola” inventory tag attached, and 2 “RICKY J” labels. Ricky: the scope is in good hands!

The eBay listing didn’t have the customary bootup screen, but whatever worries I had were unfounded: shortly after powering up the scope, I was greeted with the “Power-On self check PASSED” message. 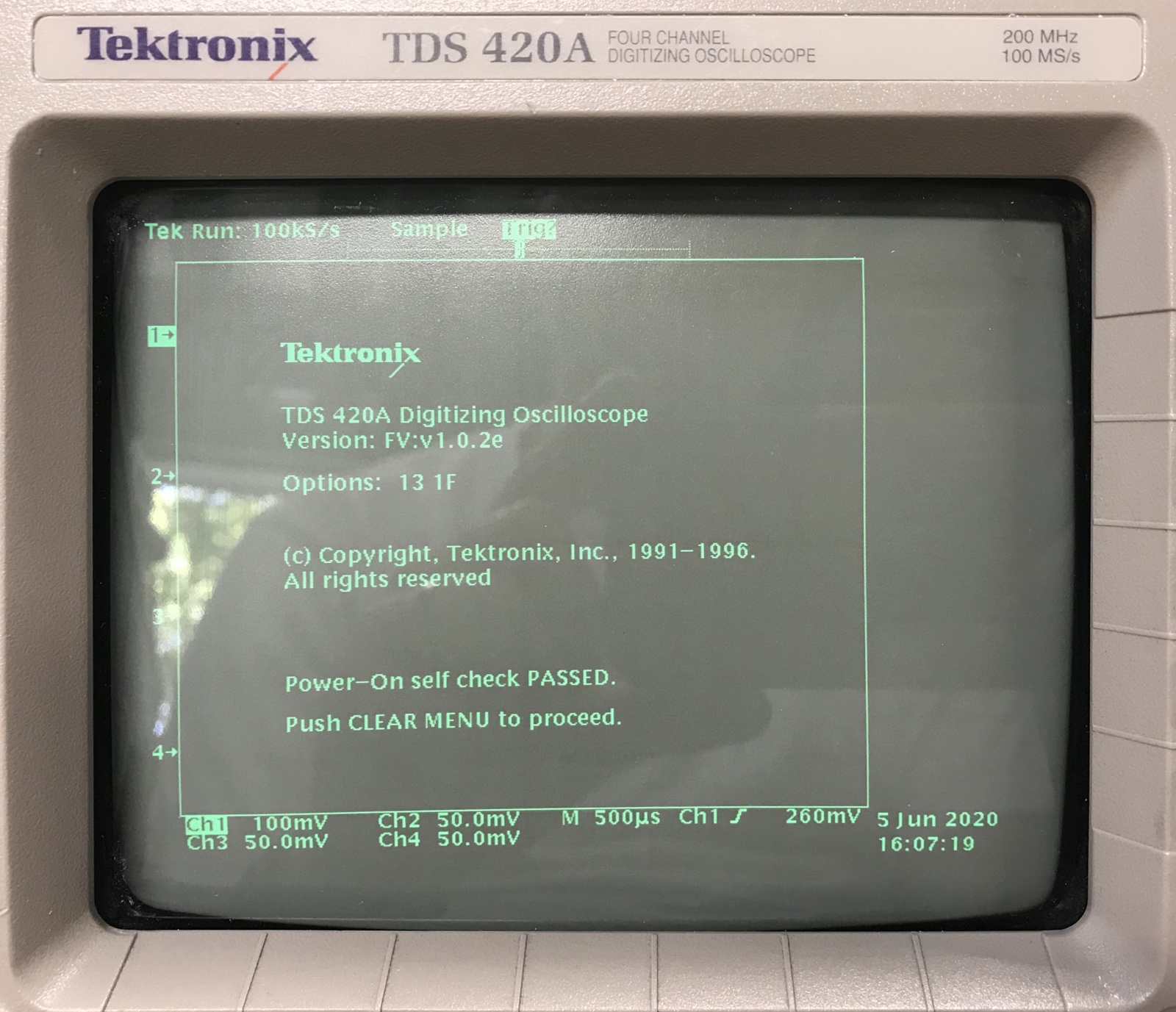 The Tektronix TDS 420A in Brief

Released in 1991, the TDS 420A is almost old enough to have teenage children by now! But despite its age, anybody who has worked with more recent Tek scopes will feel right at home: the user interface is nearly identical. That doesn’t mean that the UI is great, it’s not, but at least it’s consistent.

Here’s a quick overview of the TDS 420A. The user manual provides much more detail, of course.

Options present on my scope:

Some other options, not present on mine:

When looking around the web for information about the TDS 420A, you’ll find a bunch of videos about how to repair them by replacing electrolytic capacitors.

This is a big issue for many vintage early-1990s electronics boards: the SMD electrolytic capacitors eventually start leaking. There are 2 problem with that:

In many cases, the display will still work, and, after powering up, the scope will list which sections of the electronics are failing after its internal self check.

The general advise for anybody who buys such an old scope is to replace all caps.

I was fully prepared to have to go through the process of replacing close to 100 caps, and while waiting for the scope to arrive, I watched a bunch of videos about how to go about it.

After receiving mine, I took off the enclosure to check out the damage, and I found an absolutely pristine acquisition PCB. The solder contact points are bright and shiny (leaded solder!) and there’s barely any dust. 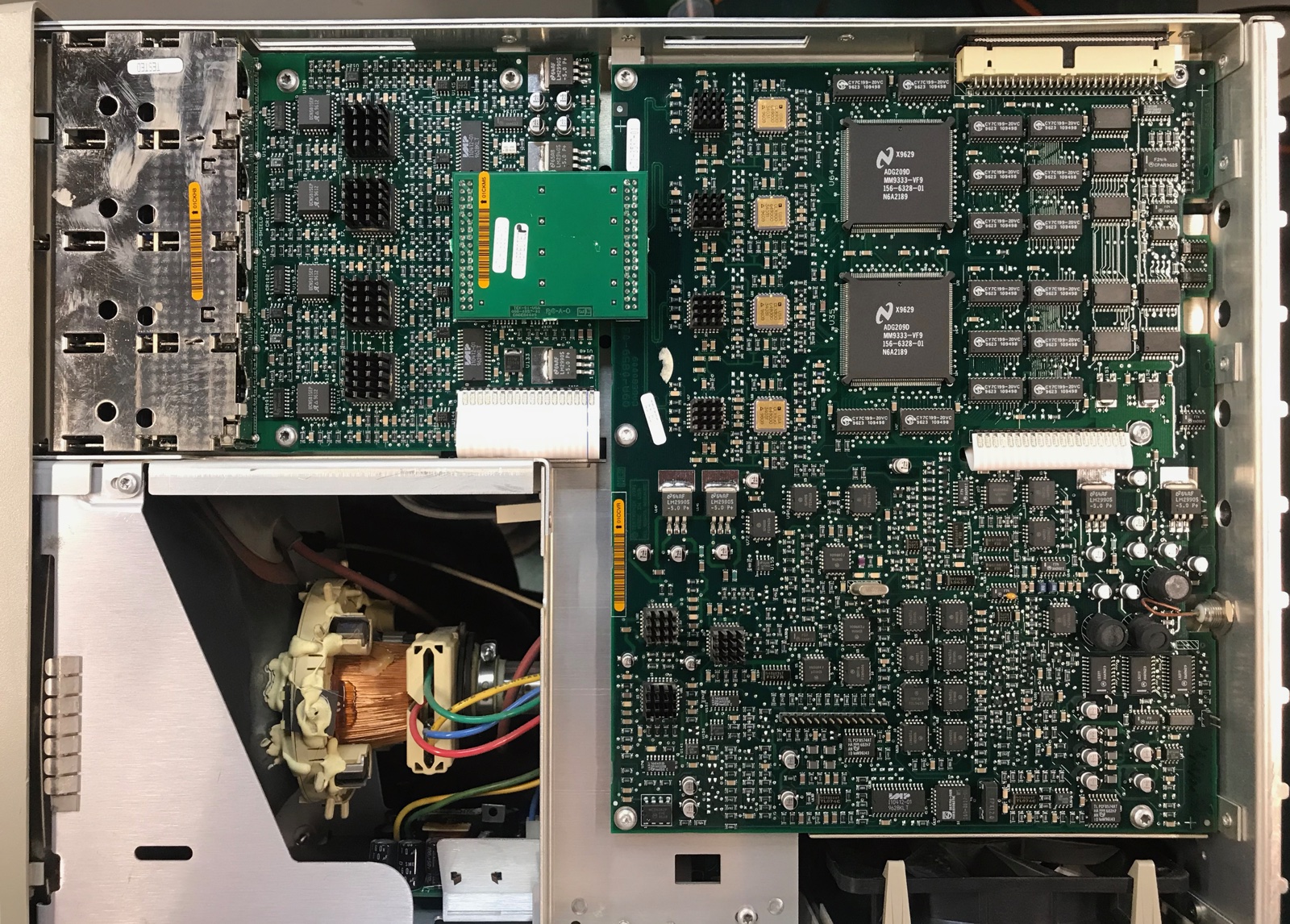 Even better: there’s no leaking electrolyte whatsoever around caps: 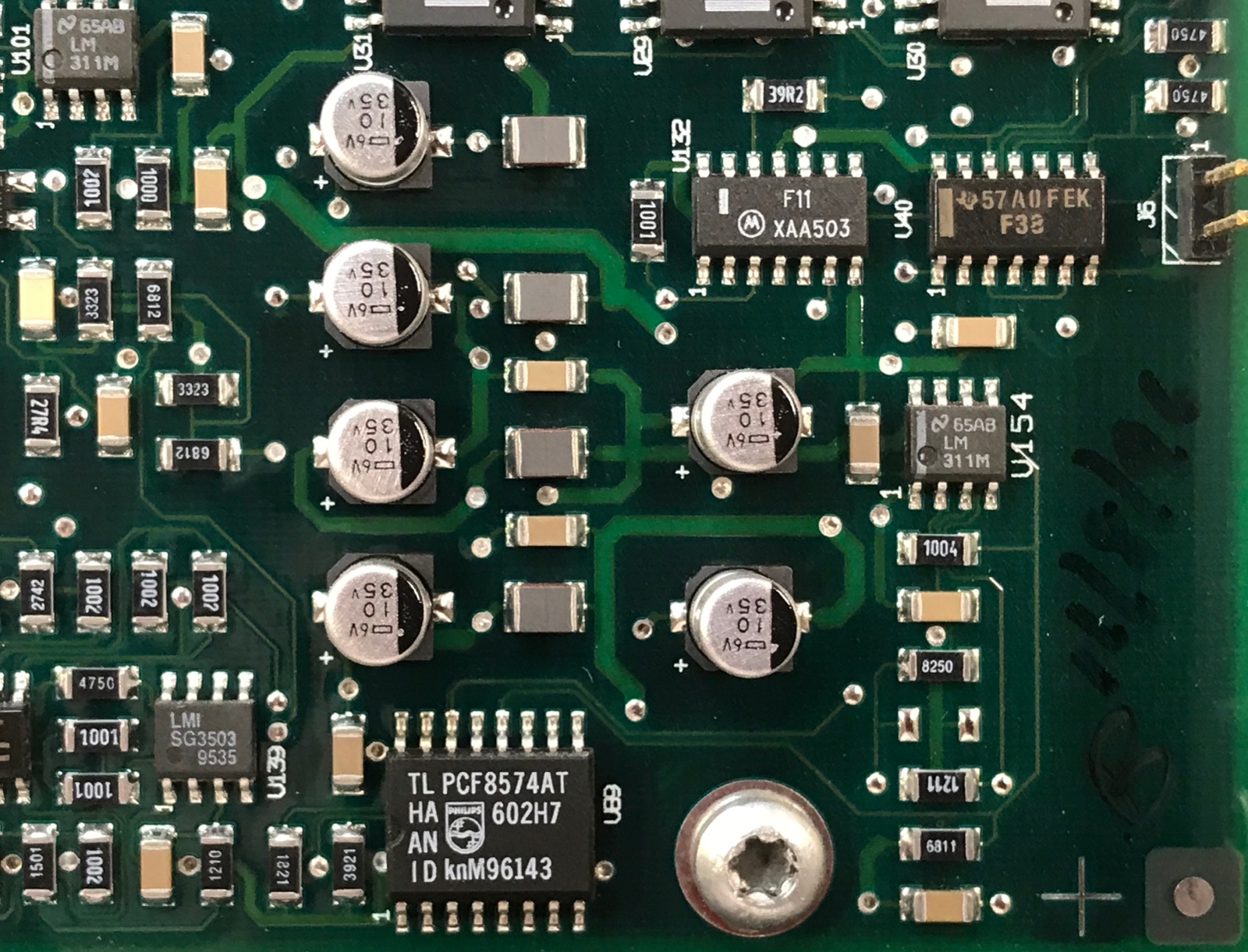 There are no markings on the outside of the scope that indicate a production date. However, the bootup screen says “Copyright 1991-1996” and on the image above, you can see a handwritten date of what seems to be “11/8/96”.

This commenter on EEVBlog has the following to say to a fellow TDS 420A owner:

Your oscilloscope says ‘copyright 1996’. That means it is a later model which doesn’t have the leaky capacitors. I’d leave the oscilloscope as it is.

And that’s exactly what I’ll do!

For those who aren’t so lucky, here are some repair videos that I found useful:

Tektronix oscilloscopes of that era use NVRAM to store information about which options are enabled.

And just like with some Rigol or Siglent scopes, if you know what you’re doing, there are ways to non-invasively change these configuration values and install new features for free.

The TDS 420A doesn’t have many options available that would move the needle in terms of general usefulness… except for option 1M, support for 120K sample points.

A closer look at the acquisition PCB shows 2 large ASICs that are surrounded by 16 Cypress chips of type CY7C199-20. Those are 32K x 8 SRAM chips with an access time of 50MHz. 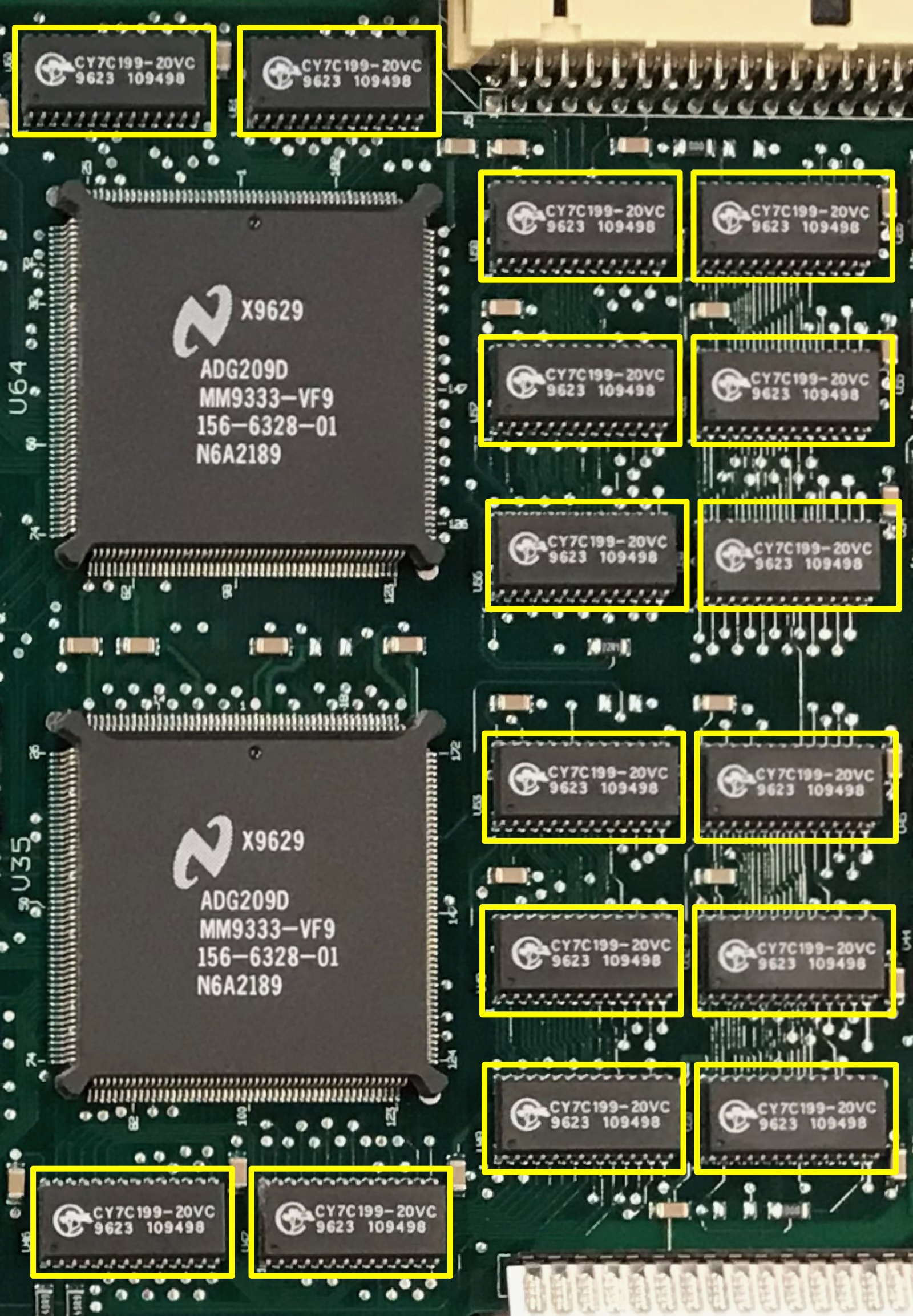 There’s little doubt that the acquisition board has enough memory to store 120K sample points.

And since there are 4 chips per channel, interleaving accesses to this memory is sufficient to store samples at a rate of 100MHz even when the individual chips are limited to 50MHz.

Whether or not it’s possible to hack the scope and tickle it into enable 120K samples points is something to explore later.

Tek scopes are used for decades and Tektronics cares about its customers. 29 years after introduction, most manuals and programming guides are readily available on their website. And if some of the more obscure information isn’t there, some other website probably has a copy.

I have a bunch of hobby projects in mind for this thing: remote control over GPIB, glscopeclient support, trying to enable more features etc.