With the whole shelter in place going on, I’ve been spending a lot of time in my garage, now serving as my work office and lab. And that includes quality time with my oscilloscope, a Siglent SDS2304X. 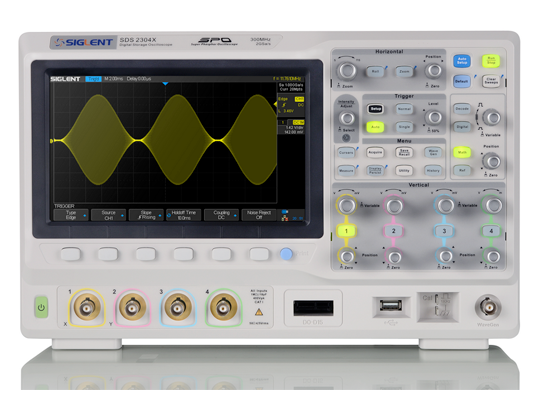 One feature that I have used quite a bit is the ability to take screenshots to add as illustration to some of my blog posts. But I’ve always used them the primitive way: by saving the screenshot on a USB drive that’s plugged into the USB type A connector on the front of the scope. 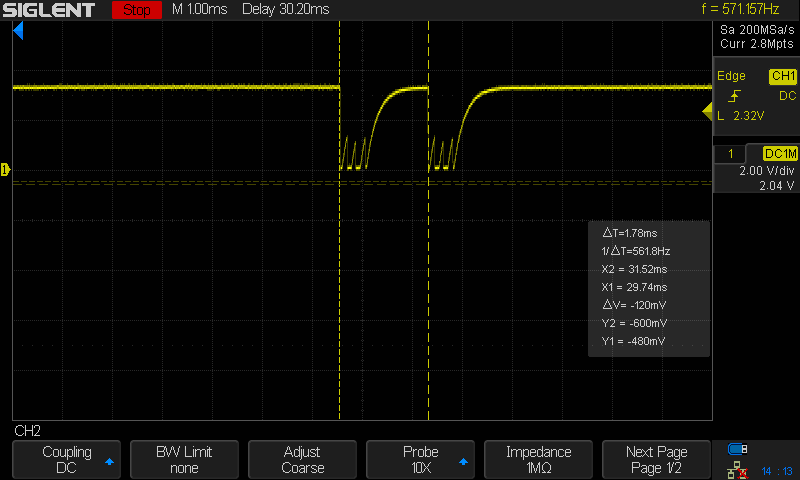 The problem with that is that you can end up with a USB drive full of screenshot bitmap files that are sequentially numbered without any futher annotation or context. It’d be much easier if I could immediately save the screenshot from the scope straight onto my computer and give them a clarifying filename.

I knew that the Ethernet and USB type B connectors on the back could be used to remote control the scope, but I had never tried. 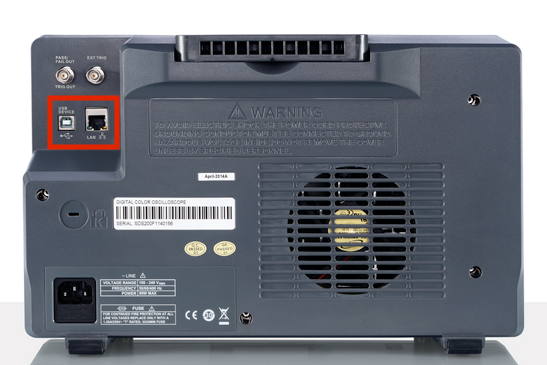 And thus starteth my descent into the world of protocols to control test equipment.

I first start by looking at the general parts of the whole protocol stack. In later blog posts, things will get more specific.

An Overview of the Test and Measurement Equipment Protocol Stack

When you’ve never dealt with these kind of protocols before, it’s easy to get overwhelmed with all kinds of protocols, protocol layers, and APIs. It took me a while to see the forest through the trees, but here’s what I ended up with:

There are essentially 3 layers. They probably have an official name, but I’ve named them myself as follows.

If this sounds all simple enough, don’t worry: it’s not as clear-cut as I’m making it out to be. For example, USBTMC has a messaging system that has been borrowed almost entirely from GPIB/IEEE-488.2

To make things even more fun, the fact that these standards are well defined doesn’t mean that equipment follows them. Rigol oscilloscopes are known to use a different TCP/IP port number than those mandated by the standard. USBTMC has seen very buggy implementations. Some Siglent oscilloscopes support raw TCP/IP sockets as transport layer while others only support VXI-11.

When tying all of this together in an automation setup, there’s a lot of complexity to manage. But fear not: other standards were created to bring some uniformity to the whole deal. The Lan eXtensions for Instrumentation (LXI) consortium oversees standards that are related to LAN/Ethernet communication, and the Virtual Instrument Software Architecture (VISA) tries to abstract all these transport methods behind one API.

RPC is synchronous by nature, which means that a request needs to be completed before the next one can be issued. (This can be a performance bottleneck when there’s a sequence of many small calls, which is why HiSLIP was developed as an alternative.)

One interesting feature of VXI-11 is the ability to discover connected devices on the network: instead of explicitly specifying the IP address or hostname of your device, devices make themselves know by responding to a broadcast transmission.

While it’s supposed to be supported, I have not been able to to make this work with my scope!

Everything that follows in this section is nicely hidden behind APIs, but it took me a long time to figure this all out, so I’m recording it here for posterity. Feel free to skip.

Under the hood, making a connection to a VXI-11 enabled device goes in two phases:

Wireshark was really useful to dump all the traffic between my PC and the scope, and it has built-in support for VXI-11 RPC calls!

Instead of using a VXI-11 (which is a layer on top of TCP/IP sockets), some equipment doesn’t bother and simply transmits and receives commands and data using raw sockets.

VXI-11 offers additional features such as abort and interrupt channels, but more often than not, this is not needed.

One benefit of raw sockets is that you’re not constrained by the synchronous nature of RPC calls: if you like, you can issue multiple request before fetching the data.

Telnet is a relatively thin layer over raw sockets: it’s totally possible (and common) to telnet into a server which supports regular sockets and type the command that would otherwise be entered by a client.

As a result, it’s not clear to me whether there’s a real difference in service on a scope that annouces raw sockets and telnet support over Ethernet.

Defined by the Interchangable Virtual Instruments (IVI) Foundation (which also manages the VISA API and the SCPI specifications), the High Speed LAN Instrument Protocol is a modern and faster alternative for VXI-11.

Its primary benefit is the asynchronous ‘overlap mode’, which allows multiple commands to be transmitted without first waiting for their return data. This makes it possible to fully use the bandwidth of the Ethernet channel.

The official specification is here.

I didn’t run into any equipment with HiSLIP support (but I also didn’t look for it!).

The Versatile Instrument Control Protocol (VICP) is another transport protocol on top of TCP/IP. It’s specific to LeCroy. While it’s still supported on many modern LeCroy oscilloscopes, most of them also support VXI-11.

I couldn’t find a real VICP specification, but you can find an open source support library, published by LeCroy engineers, on SourceForge.

The Lan eXtensions for Instrumentation (LXI) consortium oversees a number of standards related to communication protocols for instrumentationa and data acquisition that use Ethernet.

The list of standards can be found here and includes the LXI Device Specification, HiSLIP, Clock Synchronization etc.

The USB Test and Measurement Class Specification is the device class for, well, test and measurement equipment.

The specification is a suprisingly short 40 pages and more or less readable.

It defines a number of endpoints (virtual data channels) that must be used to transmit and receive data, message types, packet headers, and how data needs to be encapsulated inside those packets.

There is also a subclass specification that defines the communication of IEEE-488 traffic over USB.

Some devices support the serial-over-USB protocol. These are often cheaper devices that just need a few simple ways to configure themselves.

Going back all the way to the late 1960s, there was a time when all T&M equipment was equiped with a GPIB interface.

Standarized as IEEE-488, it supports an 8-bit parallel bus that can transfer at speeds of up 8MByte/s (1MByte/s on older devices), up to 15 devices in a daisy-chained cable configuration, separation of control and data transfers (a controller can instruct one device to send data directly to multiple listening devices without being involved in the data transfer itself), device service requests (interrupts) using serial or parallel polling, etc.

There are 2 parts to the specification: IEEE-488.1 deals with the phyisical aspects and electrical signalling while IEEE-488.2 defines the command structure. The more recent SCPI standard (see below) is layered on top of the IEEE-488.2 specification.

One of the major factors behind its demise were the cost of the GPIB connector itself and the cable.

If you want to control a GPIB-equiped device today, there are USB interface dongles such as the National Instruments GPIB-USB-HS or the Agilent 82357B. One eBay, they can be found for prices of $70 and up.

The official IEEE-488 specifications are only available behind a paywall. Getting your hands on it will depends on your wallet or on your persistence in going through Google search results for the term “ieee standard digital interface for programmable instrumentation”.

VISA - One API that Rules Them All

With all these different transport standards, you’d think it’ll be a nightmare to remote control various instruments, but you’d be wrong (to a certain extent…)

The IVI Foundation has the VISA API specification: an generic API that hides the lower level details of each transport protocol.

There are commercial and open source implementation for different operating systems.

NI VISA by National Instruments is one such commercial implementation. PyVISA is probably the most common open source one.

To give an idea about how easy it is to connect to my Siglent scope with PyVISA, the following code queries and prints the scope identification string over VXI-11:

And this code does the same using USBTMC:

All it took was changing the resource path… Accessing a device over GPIB wouldn’t be any more complicated.

Strictly speaking, PyVISA-py is the library that implements the Python VISA backends, while PyVISA is a utility library on top of that. In addition to PyVISA-py, PyVISA can also use the NI VISA or other backends.

After going through all these transport layers, it finally time to go up one level in the stack.

The Standard Commands for Programmable Instruments (SCPI aka ‘skippy’) standard is a specification from 1999 that’s layered on top of the IEEE-488.2 command specification. It can be downloaded here.

Let’s to go straight to the source to see what SCPI is trying to achieve:

Standard Commands for Programmable Instruments (SCPI) is the new instrument command language for controlling instruments that goes beyond IEEE 488.2 to address a wide variety of instrument functions in a standard manner. SCPI promotes consistency, from the remote programming standpoint, between instruments of the same class and between instruments with the same functional capability. For a given measurement function such as frequency or voltage, SCPI defines the specific command set that is available for that function. Thus, two oscilloscopes made by different manufacturers could be used to make frequency measurements in the same way. It is also possible for a SCPI counter to make a frequency measurement using the same commands as an oscilloscope.

It’s questionable whether or not SCPI achieved that goal.

To fetch an acquired waveform from an oscilloscope, SCPI defines the DATA(CURVe(..)) command. My Tektronix TDS 420A, has the CURVe? command (no DATA(...)) required, my Siglent uses WF?, a Rigol scope uses WAV:DATA?, and Rohde-Schwartz has :DATA?.

The only consistency here is that there is none.

In practise, every kind of instrumentation equipment will need a vendor or even device specific driver for remote control…

So far, everything covered here is only describes what’s out there and how it all plays with eachother.

The next step is to show how all of this can be made to work, the pitfalls etc.