In my previous blog post about the TDS 420A, I listed some of the optional features that weren’t enabled on this oscilloscope.

Even if some of these features aren’t particularly interesting, the idea that these could be enabled with some configuration hacking was pretty intriguing. And there are plenty of posts on forums (including the ones hosted on the Tektronix website!) that describe how to go about enabling these optional features.

Of the 3 available options, video triggering, advanced DSP math, and 120K sample points, the general online consensus is that the first two can enabled by writing a 1 into a strategically chosen location of the non-volatile RAM (NVRAM).

And while the 120K sample points option is the most interesting by far, one can still gain a lot of insight into how a product works internally by following a bunch of leads.

In the case of TDS oscilloscopes, there’s a lot of information online to work with: posts on different forums that talk about DIP switches to flip, GPIB connectors to connect, and commands that need to be sent.

However, many posts are incomplete, with expired links, sometimes contradictory, often about scopes of a family that is very similar but different enough to matter, and every once in a while plain wrong.

I decided to start by trying to extract the TDS 420A firmware through the GPIB interface. It doesn’t require any major surgery or even disassembly, and it’s thus unlikely to cause any harm. Yet at the same time, it had the potential of uncovering a lot of interesting scraps of information.

In what follows, I explain how to do that.

Manipulating the TDS Oscilloscope Firmware and Configuration with Tektools

One thing that comes up quite a bit online is tektools.

These are tools for backing up and restoring NVRAM, Flash and EEPROMs in certain Tektronix oscilloscopes such as the TDS 5xx/6xx/7xx series

While not explicitly mentioned, it worked for me to read the TDS 420A firmware. Unlike the TDS families listed above, TDS 4xx series scopes do not store configuration parameters in EEPROM, but in static RAM that’s been made non-volatile by a long lasting lithium battery. I was not able to dump the contents of that NVRAM with tektools.

I had already installed the Linux GPIB driver, and compiling tektools was trivial: just follow the instructions.

Switching the TDS 420A into Firmware Update Mode

Extracting the firmware is a bit more involved than just running the tool: at least on a TDS 420A, you first need to flip 2 DIP switches inside the scope to put it in firmware update mode.

The service manual shows how to do this through one of the ventilation holes of the case. With a tiny screwdriver and a flash light, changing the switches only takes a minute of your time. 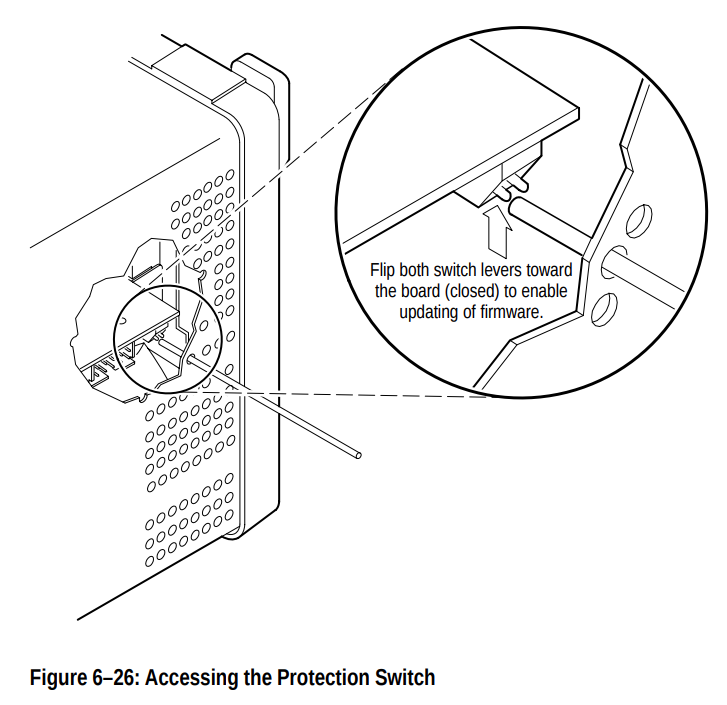 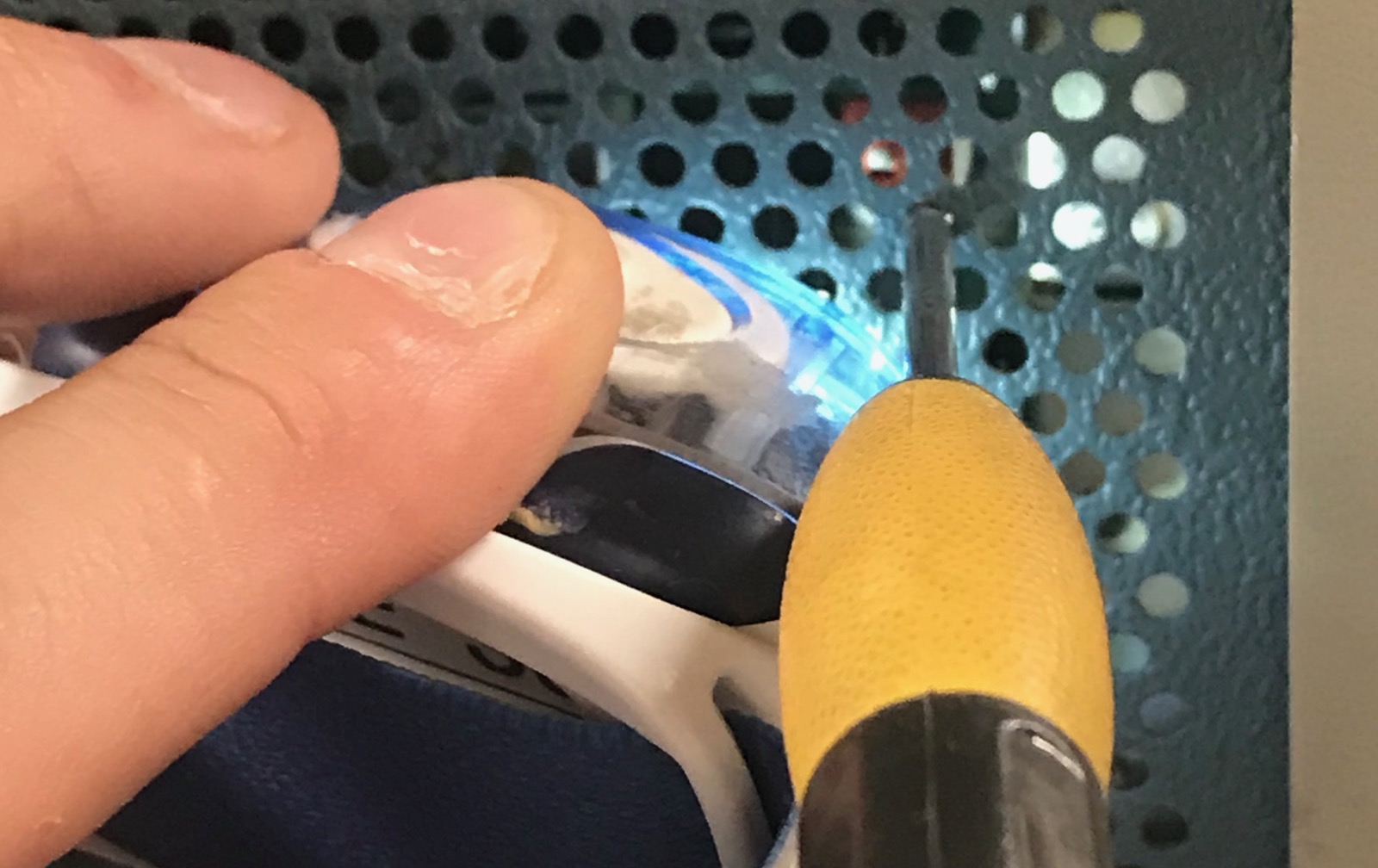 Firmware update mode is a minimal operation mode that accepts a small set of GPIB commands to read and write the flash ROMs1. The oscilloscope isn’t functional in any other way: the CRT is powered off, buttons don’t work, the LEDs of the front panel are all switched on.

Dumping a Section of the Address Map

Reading a section of the address space to a file is simple:

However, there’s a caveat: the 4GB address map of an early nineties product is obviously very sparse, with the vast majority of address not used for anything. On my TDS oscilloscope, a tektool access to a non-mapped address breaks accesses to any memory locations, including mapped ones, until the next power cycle.

When in firmware update mode, power cycling the scope is matter of seconds, so it’s not a huge deal once you know about it.

The TDS 420A Address Map as I Know It

I couldn’t find a clear address map of the scope online. The table below was a matter of trial, error, and a lot of power cycles:

When the boot ROM area is listed as 524288 bytes, that doesn’t mean that the ROM is 512KB (a decent amount back in 1991!) It simply means the number of bytes that can be read starting from the start address that won’t result in a bus error.

There were online reports about the address range at 0x0400_0000 being used for NVRAM, but it results in a bus error on the TDS 420A. For a while, I thought that 0x0500_0000 was the option storage, but no amount of writing different values to that regions make any of the scope options to appear.

I ended up with something that turned out to be extremely valuable: a full binary dump of all the firmware.

Strings in the Boot ROM

At this point, I wasn’t interested just yet in exploring the firmware in depth, but a strings command can always reveal interesting pieces of information. For example, I was wondering if it would expose some of the GPIB commands that are supported by the boot ROM.

The boot ROM strings are more or less what you’d expect:

In one of the online forums, there was some chatter about enabling TDS 4xx series options with GPIB commands, but I was not able to get this to work on my scope, not in firmware update mode nor in regular mode.

There were no obvious strings related to these kind of GPIB commands in the boot ROM (but that was also the case for the main firmware.)

While the binary contents of the alternate boot ROM address space were slightly different that the boot ROM at address 0x0, the strings content was identical.

This can easily be explained if that 512KB address space space doesn’t only contain ROM, but also some RAM, registers etc.

Strings in the Main Firmware

Commercial firmware images normally contain text data that’s used to interact with the user: command strings, help messages, error and log messages. What you won’t get are the program symbols. These are stripped to reduce code size and, maybe, to avoid reverse engineering.

This is definitely not the case for the main TDS 420A firmware. Running strings main_fw.bin resulted in a treasure trove of data!

We have the firmware, we have interesting strings that point to a console. It’s about time to start getting our hands dirty.