Every 6 months, the RISC-V consortium organizes a two day workshop where various companies and research entities present work that is one way or the other related to RISC-V.

At the November 2017 workshop, storage company Western Digital announced their intention to become a major contributor to the RISC-V ecosystem and set a goal to sell more than a billion RISC-V capable CPU cores to the market every year. At the time, it was one of the first major technology companies to put their full weight behind RISC-V.

They committed to accelerating the ecosystem as follows: 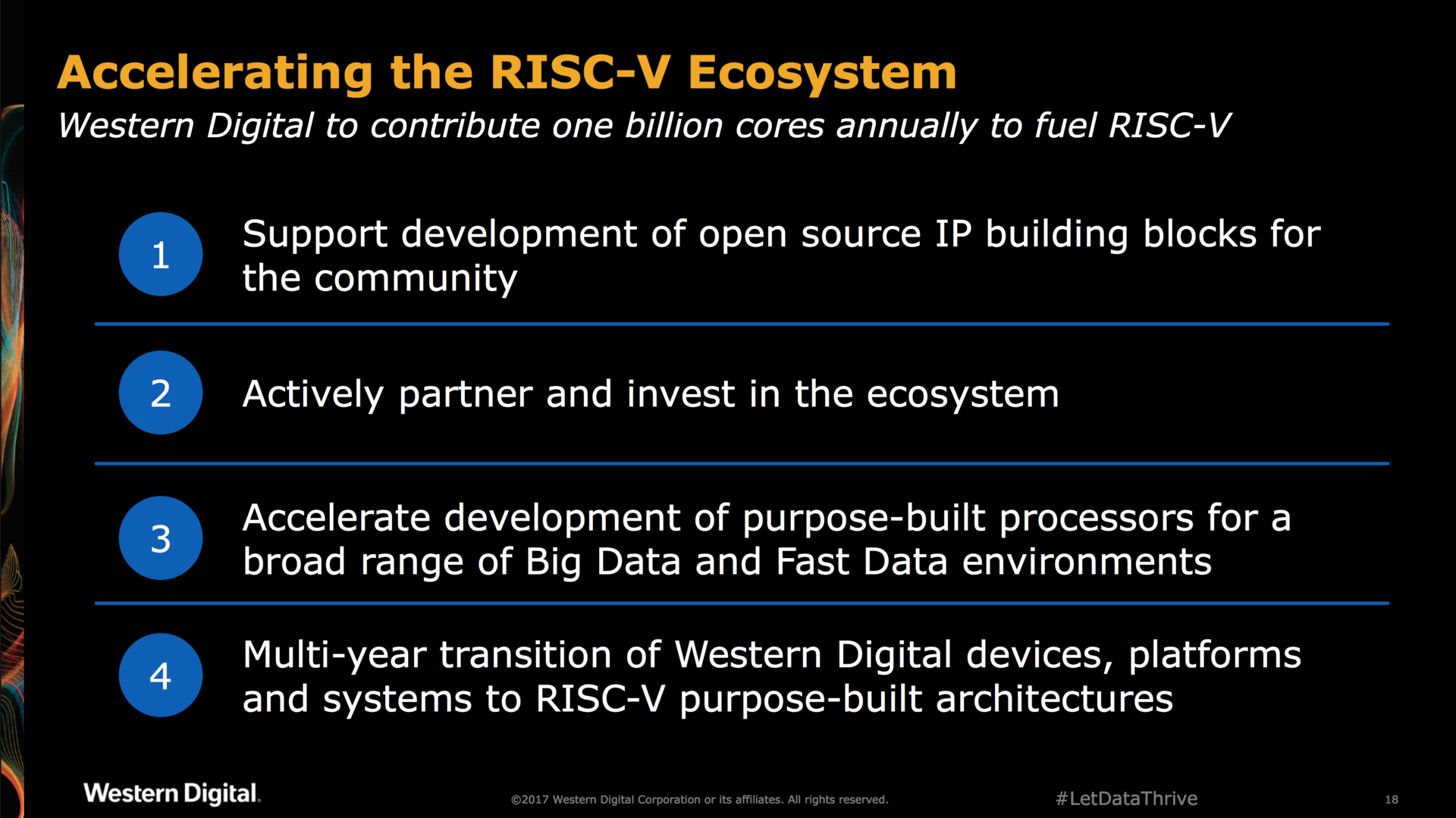 At the May 2018 workshop, the first specifics of their RISC-V IP were disclosed: 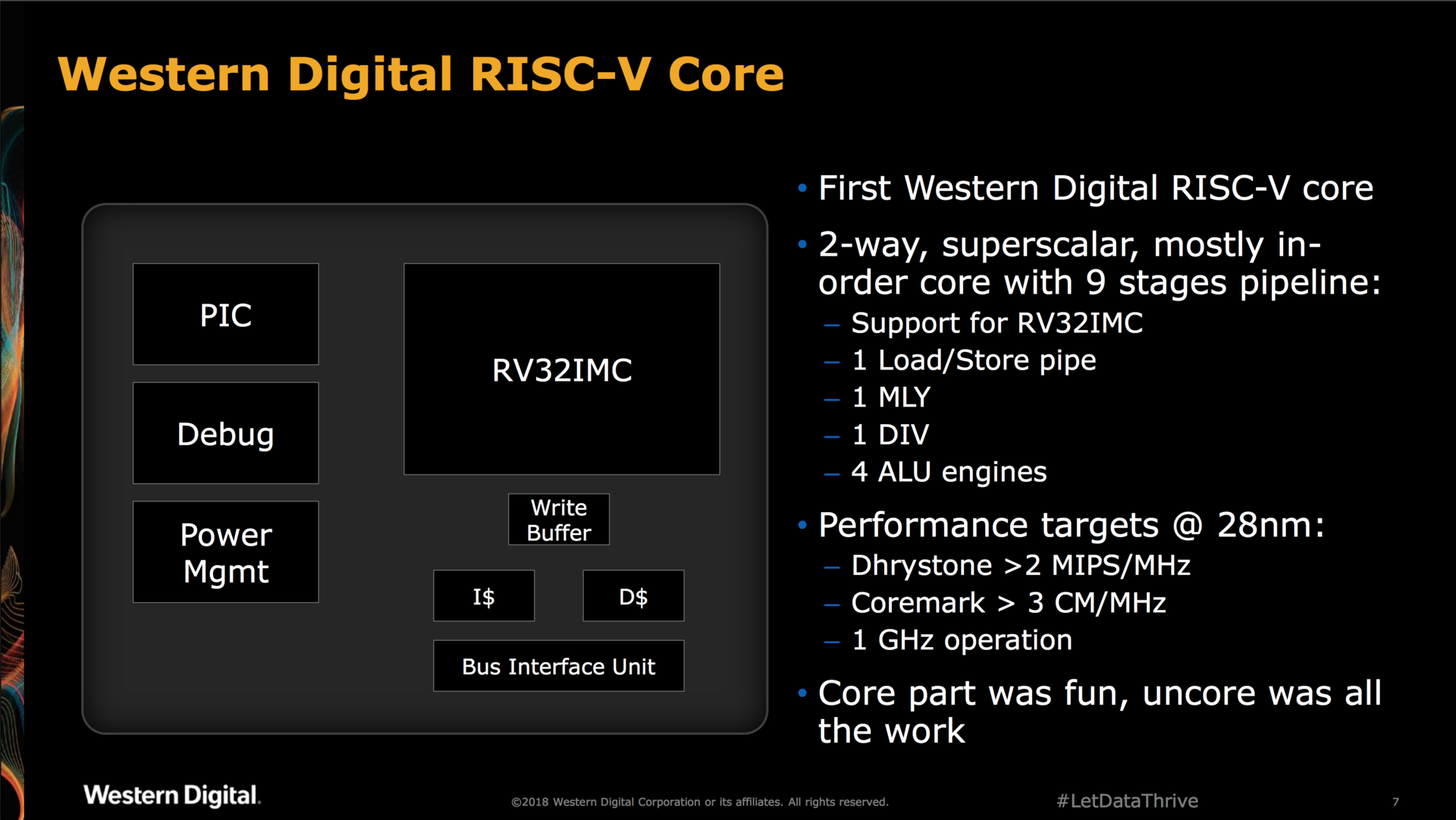 A performance of at least 3 CoreMark/MHz isn’t bad, but if the real number is close to that lower bound, it’s not stellar either when compared to, say, the Boom v2 which promises a score of 3.92 CM/MHz and 4.70 CM/MHz for resp. a dual or quad issue core: 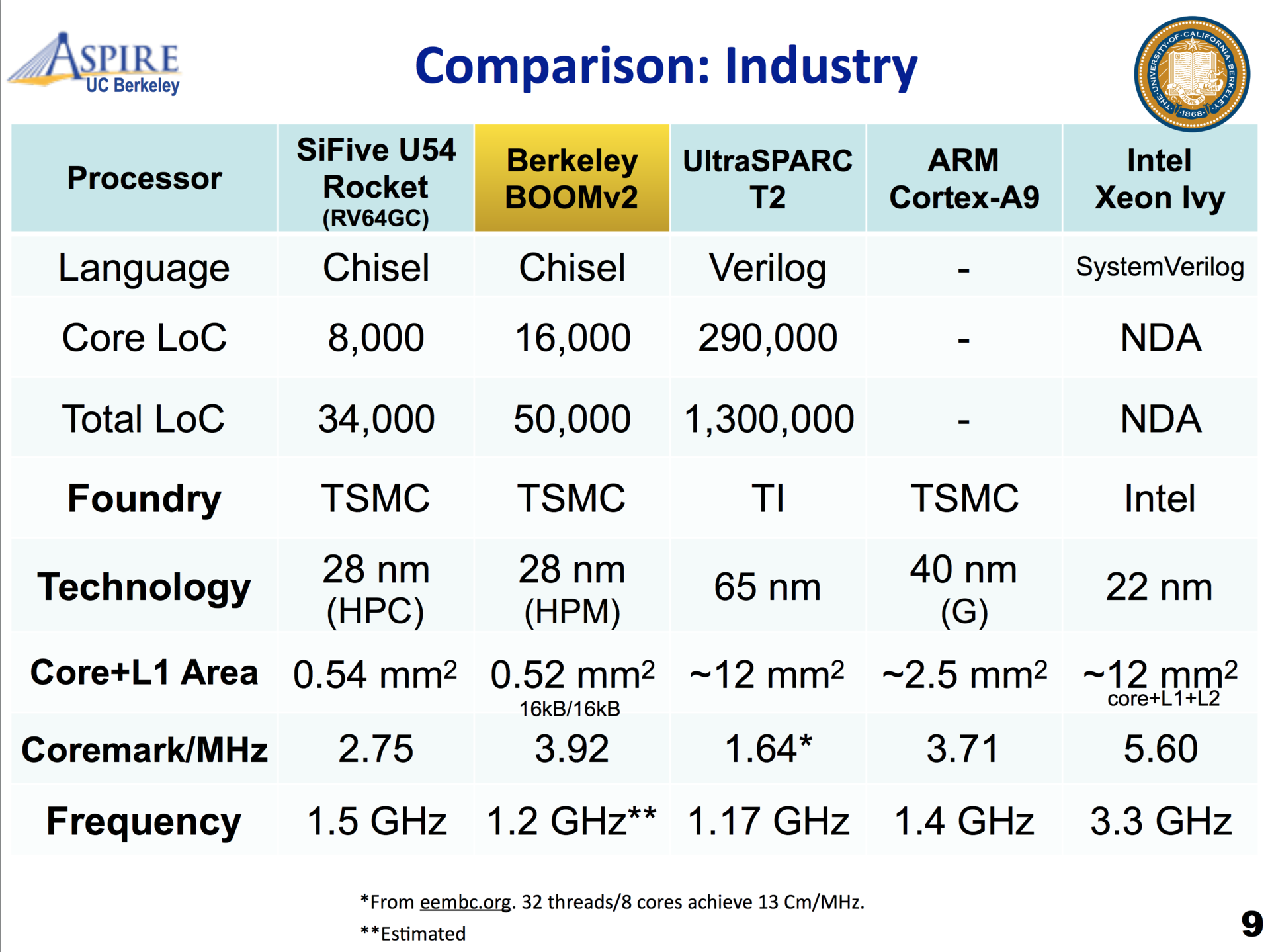 The December 2018 workshop finally saw the unveiling of Western Digital’s SweRV core, announcing an excellent 4.9 CM/MHz, just like the SiFive E76 core, with target clock speed up to 1.8GHz on an unspecified TSMC 28nm process. 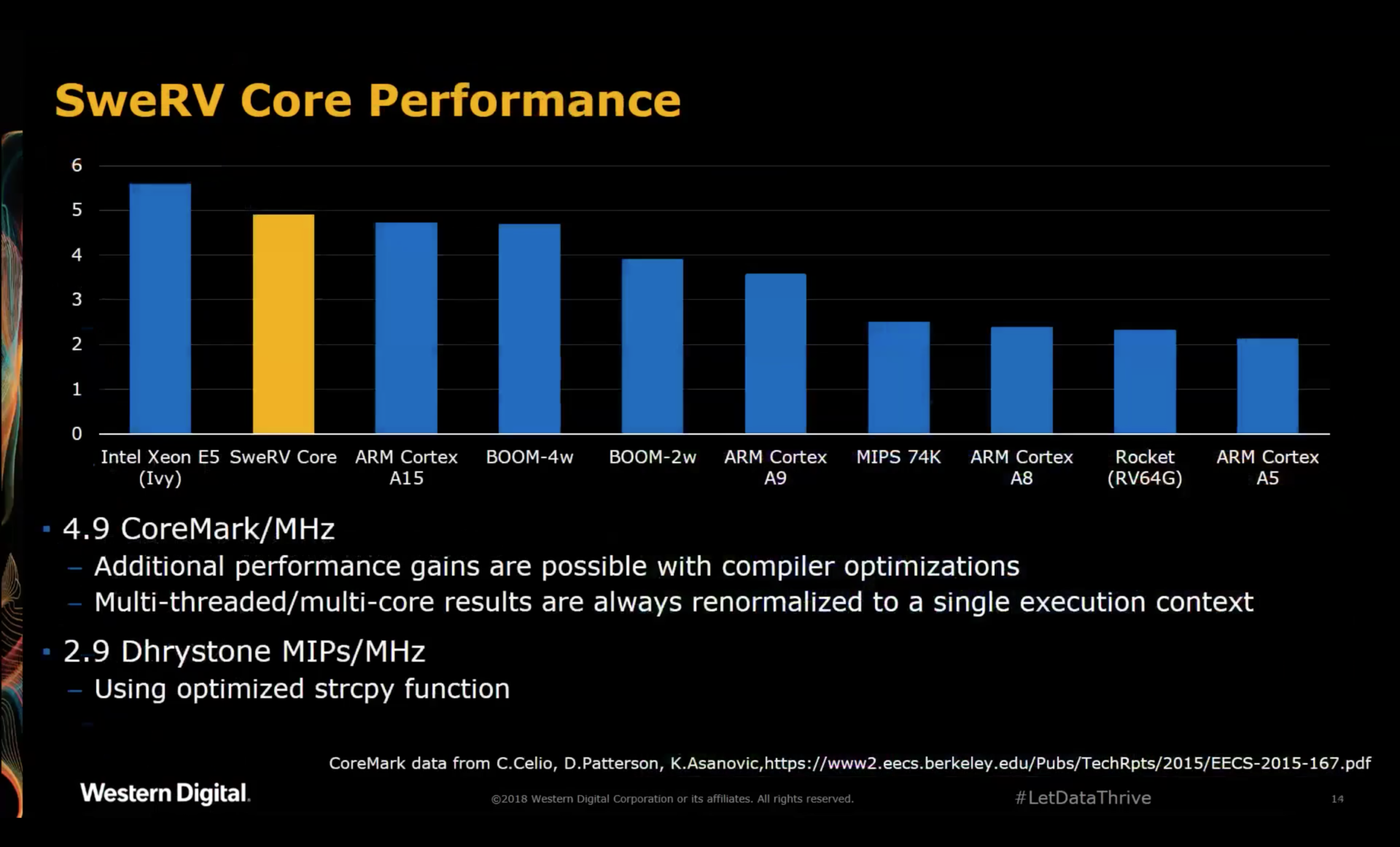 Keeping their promise of a year earlier, Western Digital also announced that the core would be available as open source under the liberal Apache 2.0 open source license, with instruction set simulator (ISS) and testbenches included as well!

In a separate session at the same workshop, lower level architectural details were provided, as well as a detailed schedule of the public release of the code.

All of this culminated with the Febrary 15 release of the full source code on Western Digital’s GitHub page.

After implementing a very low performance RISC-V core myself, and after reviewing the internals of the VexRiscv, it was time to look at the other end of the RISC-V performance spectrum!

To satisfy the true geeks, Western Digital organized a Swerv Deep Dive at the Bay Area RISC-V Meetup. The meetup was well organized (free food!) and attended by roughly 100 people.

A Webex recording of this meetup is currently still available here. (The first 53 minutes are empty. The meat of the presentation starts at the 53min30 mark.)

Zvonimir Bandic, Senior Director of Next Generation Platform Technologies Department at Western Digital, gave an excellent presentation, well paced, little marketing fluff, with sufficient technical detail to pique my interest to dive deeper in the specifics of the core. I highly recommend watching the whole thing. There was also a second presentation about instruction tracing which I won’t talk about in this post.

The full set of slides, as copied from the WebEx stream, can be found here. 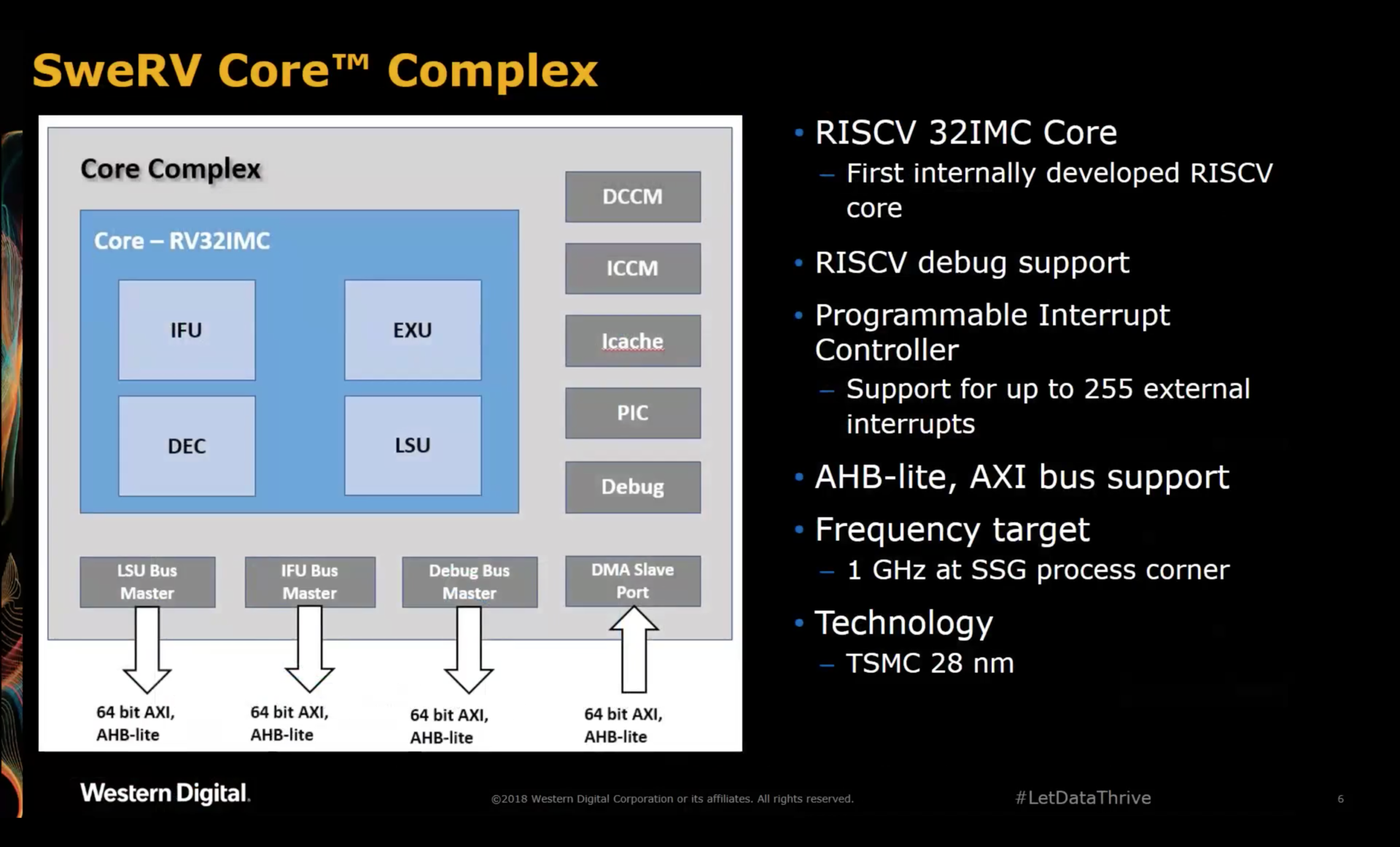 The core complex has most of the features you’d expect from a modern embedded CPU:

Not mentioned, but also present:

Surprisingly absent is a data cache. 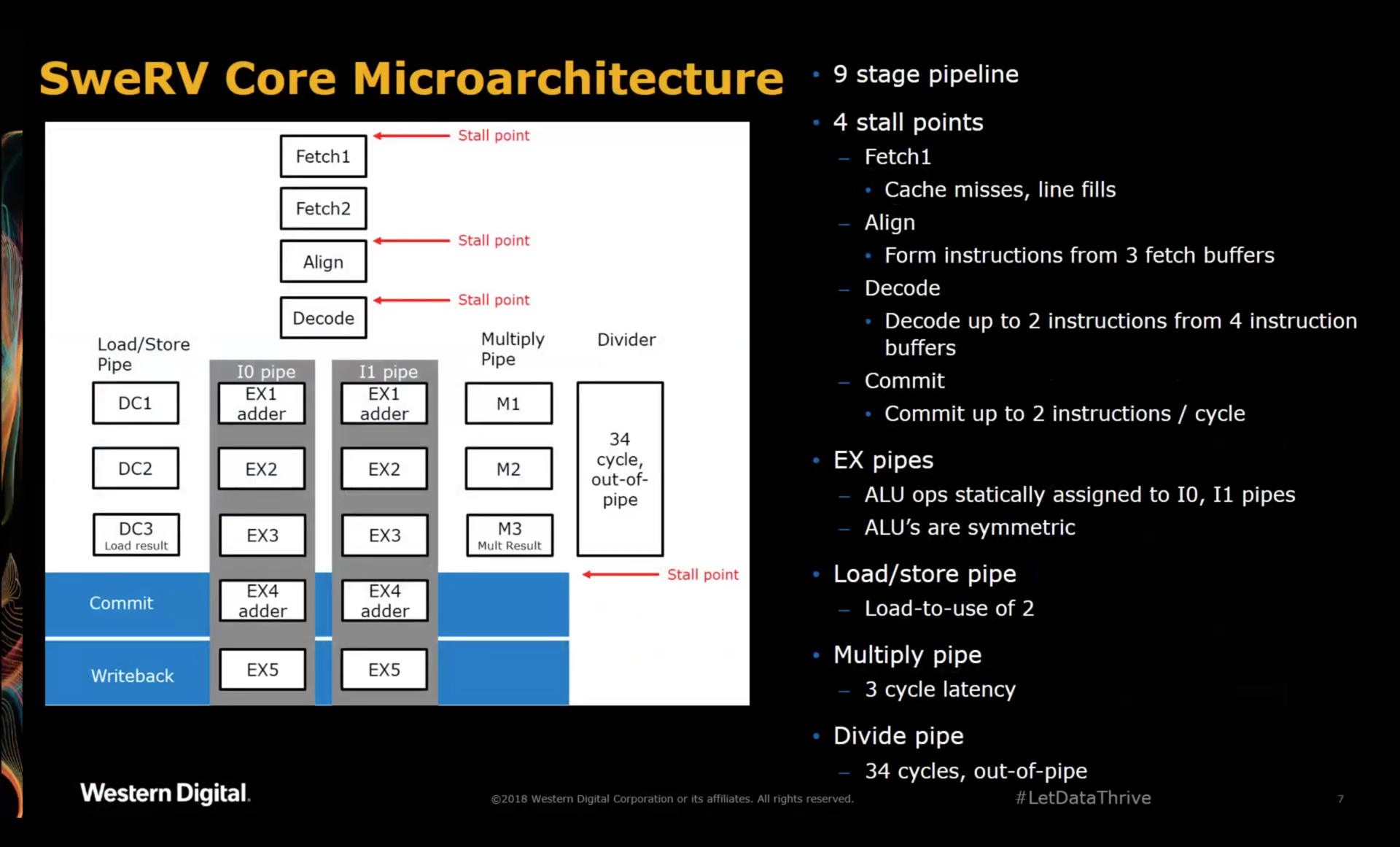 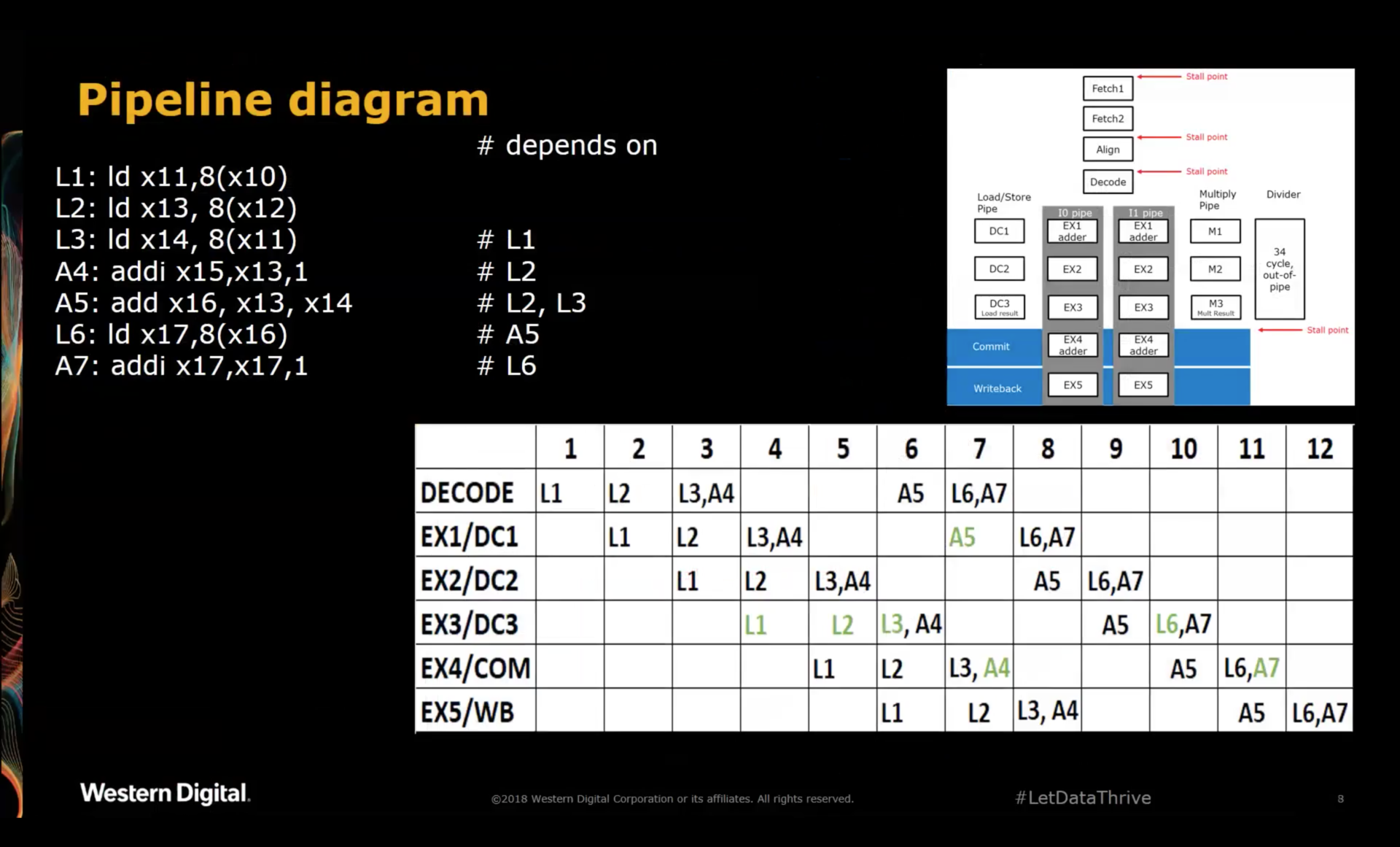 The presentation had an example with a traditional pipeline diagram to clarify how certain instruction combinations are issued and stalled in the pipeline.

In the diagram above, green indicates a successful execution of an instruction.

To get a better idea about what’s going on per instruction, I have edited the pipeline diagram with some additional annotations.

Let’s first look at instruction A4: 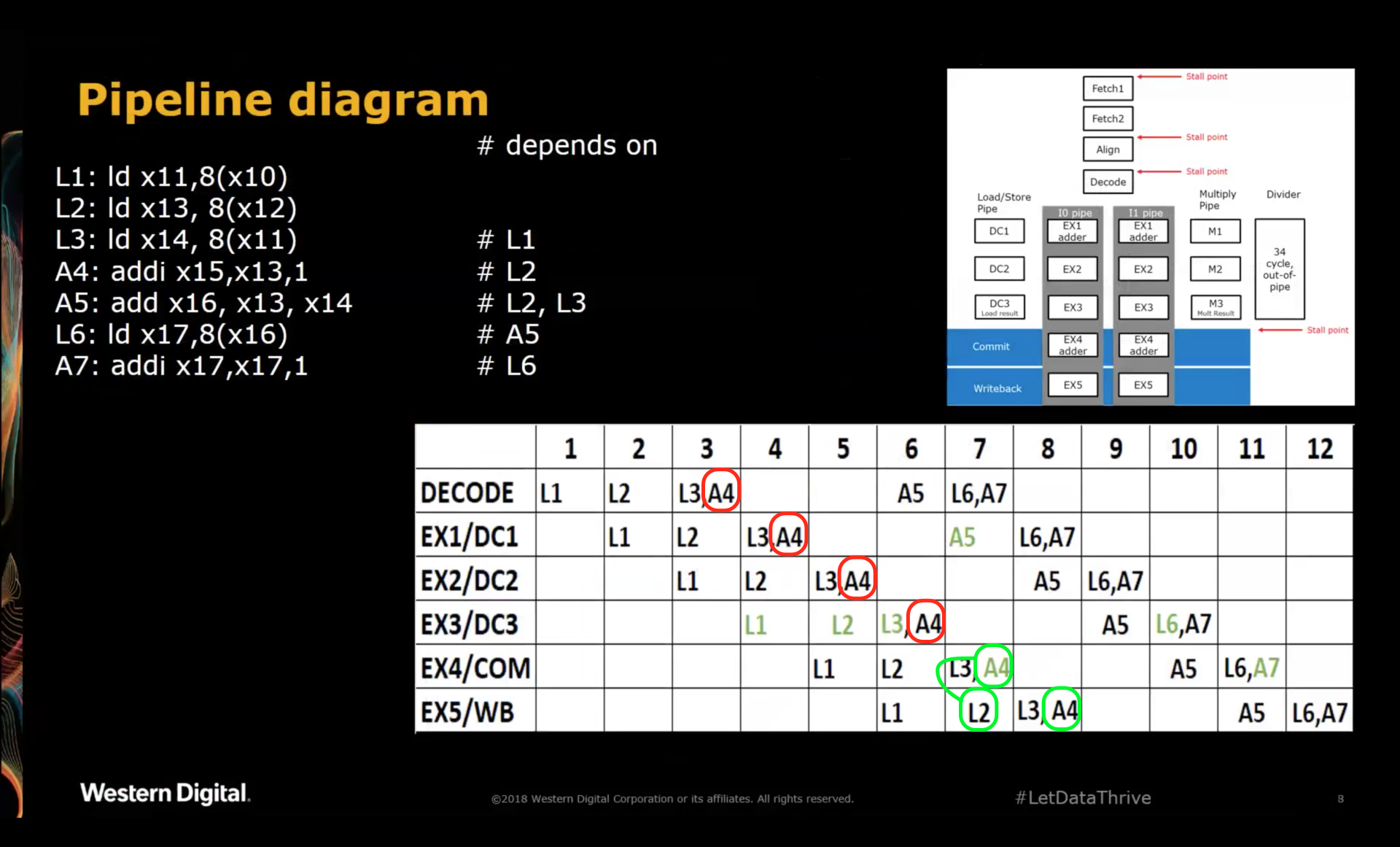 A4 is dependent on x13, the result of load L2. At cycle 4, the first chance for A4 to execute in stage EX1, L2 is still 2 cycles away from having the contents of x13 available.

Instead of stalling the pipeline, A4 travels further down the pipeline until it reaches stage EX4 where it gets its second chance at executing. At that point, the result of L2 is present in stage EX5, ready to be written to the register file.

If the pipeline diagram correctly reflects that architecture of the SweRV core, there’s a forwarding path from EX5 to EX4, which allows A4 to use the result of the L2 instruction.

We can see in the diagram that no bubbles were inserted between L2 and A4, something that would have been impossible without the EX4 retry stage: a hypothethical SweRV core without retry ALU units would have required a bubble of 1 clock cycle: sufficient to line up L2 at the EX1 stage on cycle 5, when the result of L2 is first available.

The situation for A5 is easier: 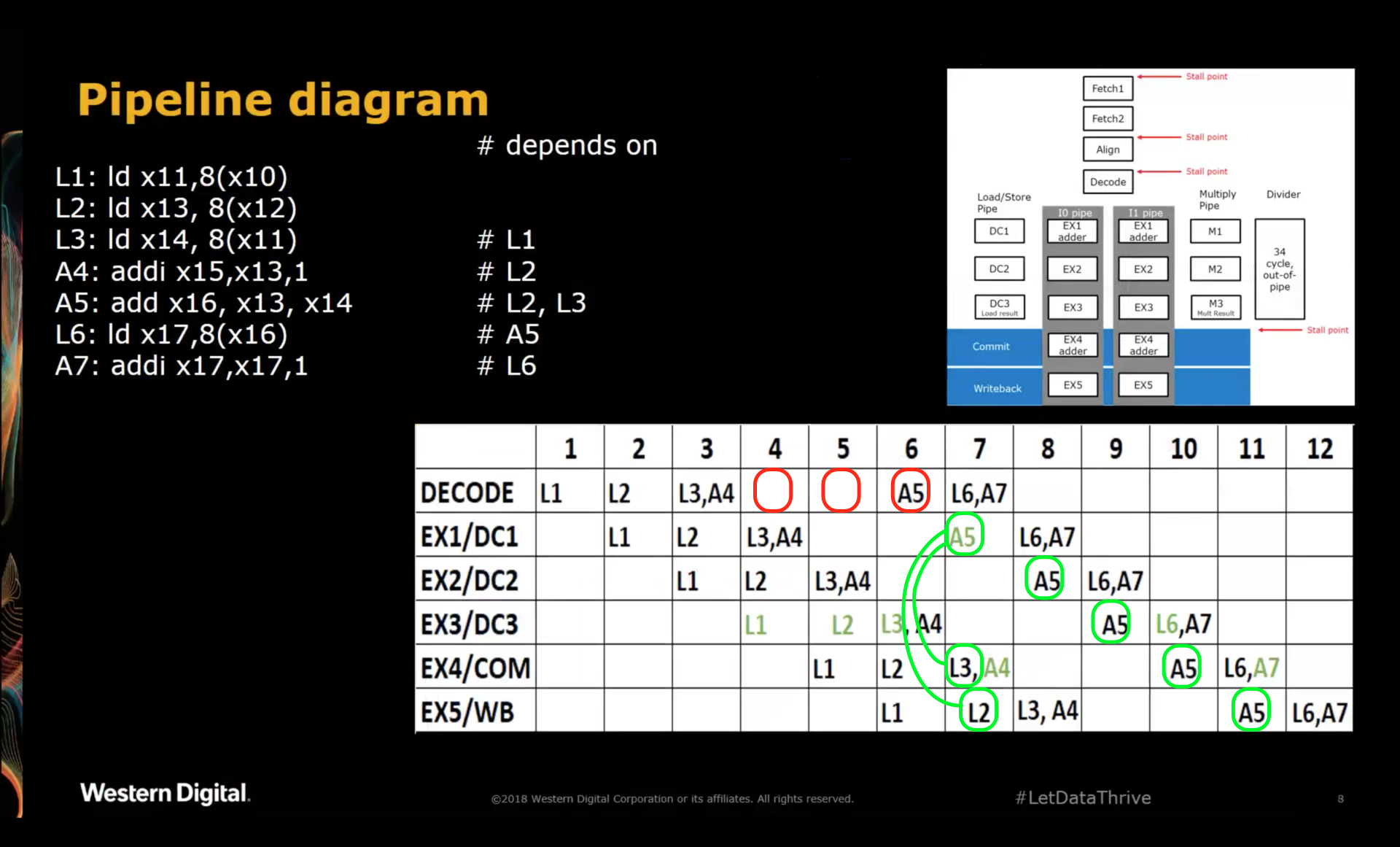 After that, A5 execution is complete and it can sail through the remainder of the pipeline until the result gets written into the register file one cycle 11.

Note that with a forwarding path from DC3 to EX1, A5 could have launched into the pipe one cycle earlier, thus reducing the number of bubbles from 2 to 1 cycle. Based on this diagram, such a forwarding path does not exist. The delay from clock to output of RAMs can be notoriously bad, and it’s often in the critical path of a design. However, that should have been mitigated by having a 2 cycle latency for a RAM access. The decision to forgo this forwarding path was probably another trade-off between logic, power and performance.

Finally, A7 presents another case where the ALU of EX4 saves the day: 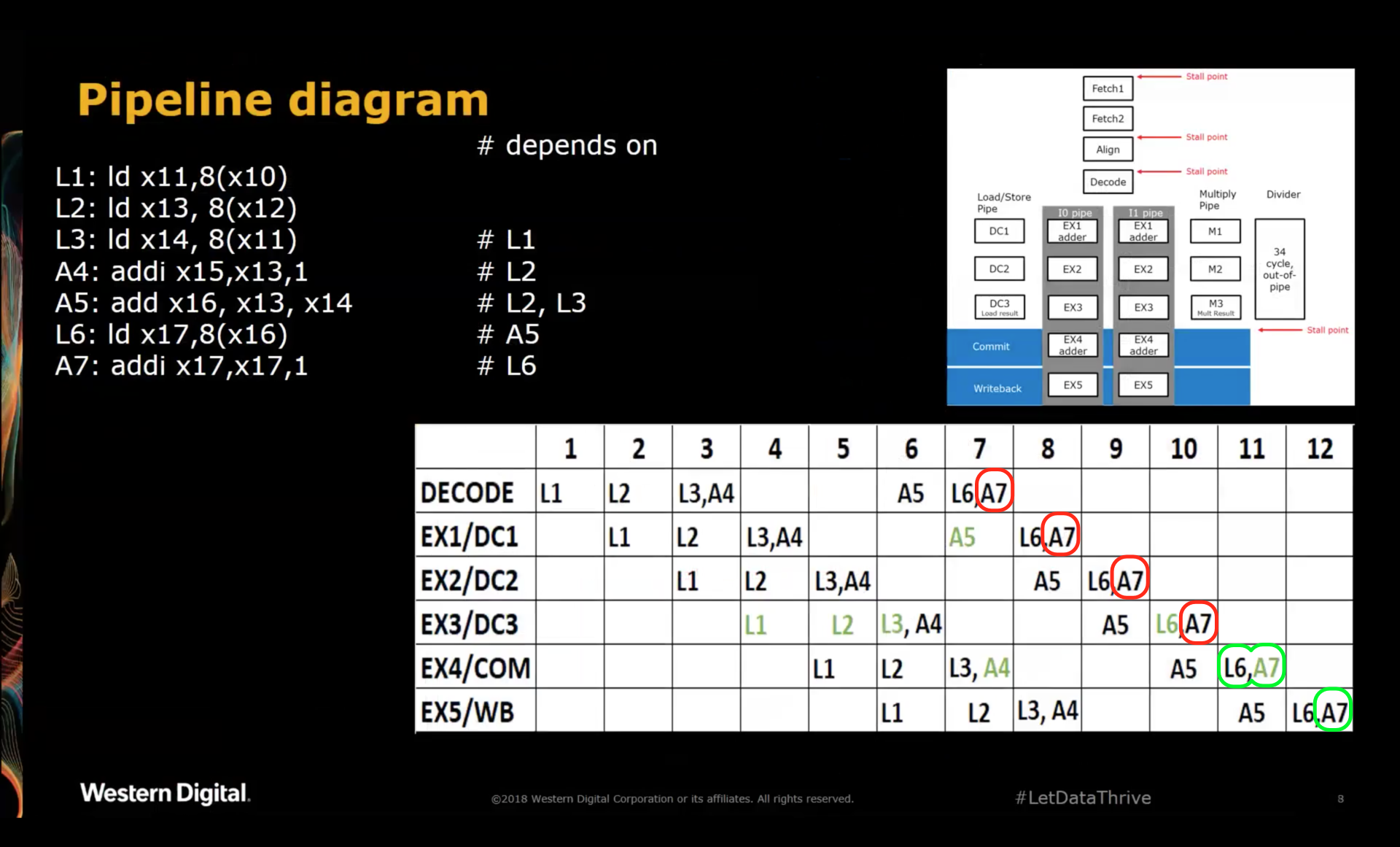 Contrary to A5, A7 depends on the result of the load instruction that comes right before it. As a result, A7 reaches EX4 right at the same time as the result of L6. There is no forwarding path necessary: A7 can simply grab the result of L6 as operand from the same pipeline stage and execute. 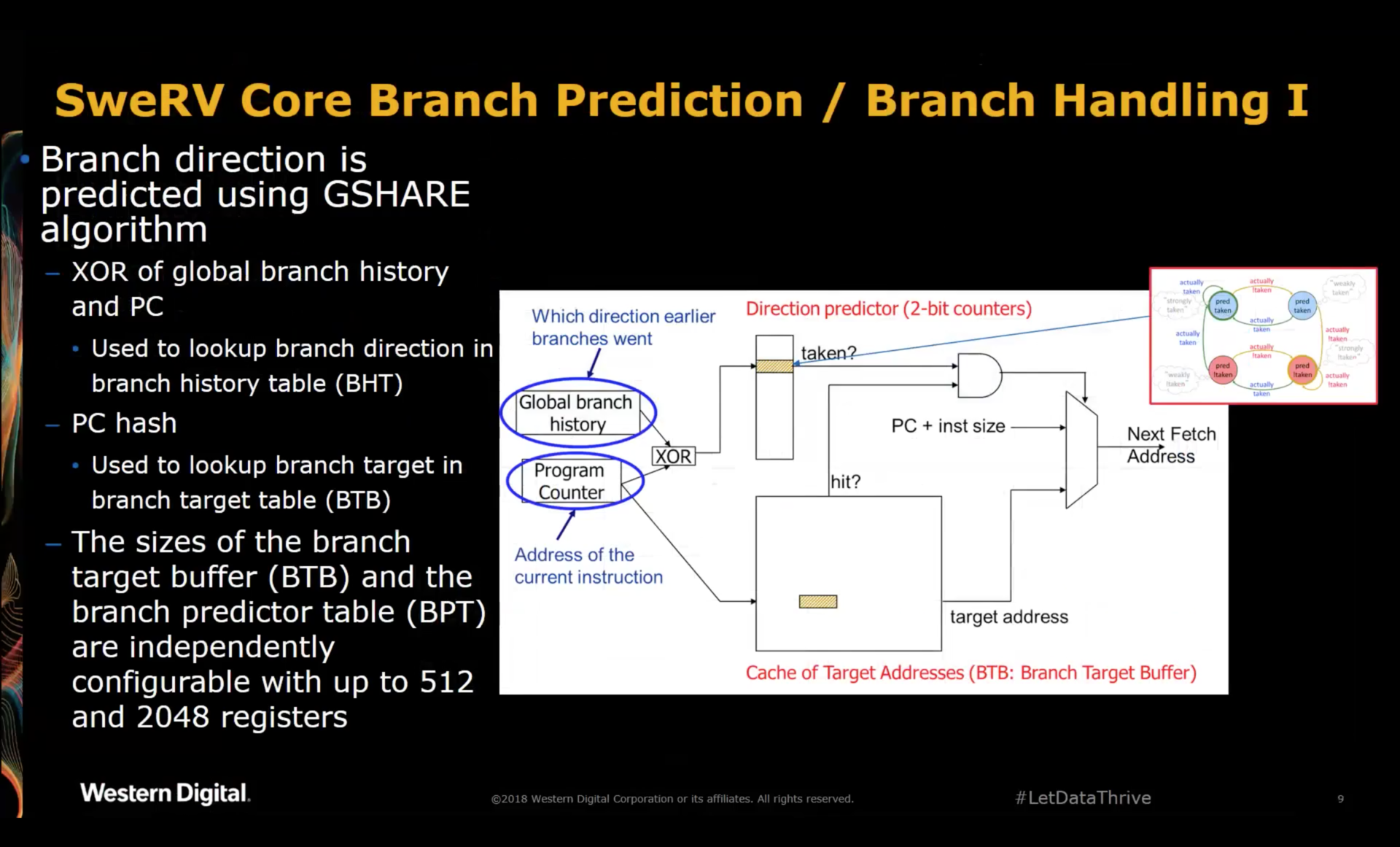 The SweRV uses the GSHARE branch prediction algorithm. According to the presenter, the architects didn’t have a lot of choices: the majority of open source cores such as those from Berkeley and ETH Zurich, as well as commerical cores all use GSHARE. Doing anything less complicated would cripple the performance compared to those cores, and more complicated algorithms are unreasonably expensive to implement.

A Google search for the GSHARE algorithm gives tons of links with information.

As is the case for many other SweRV parameters, the number of entries in the branch prediction table can be sized based on performance needs. 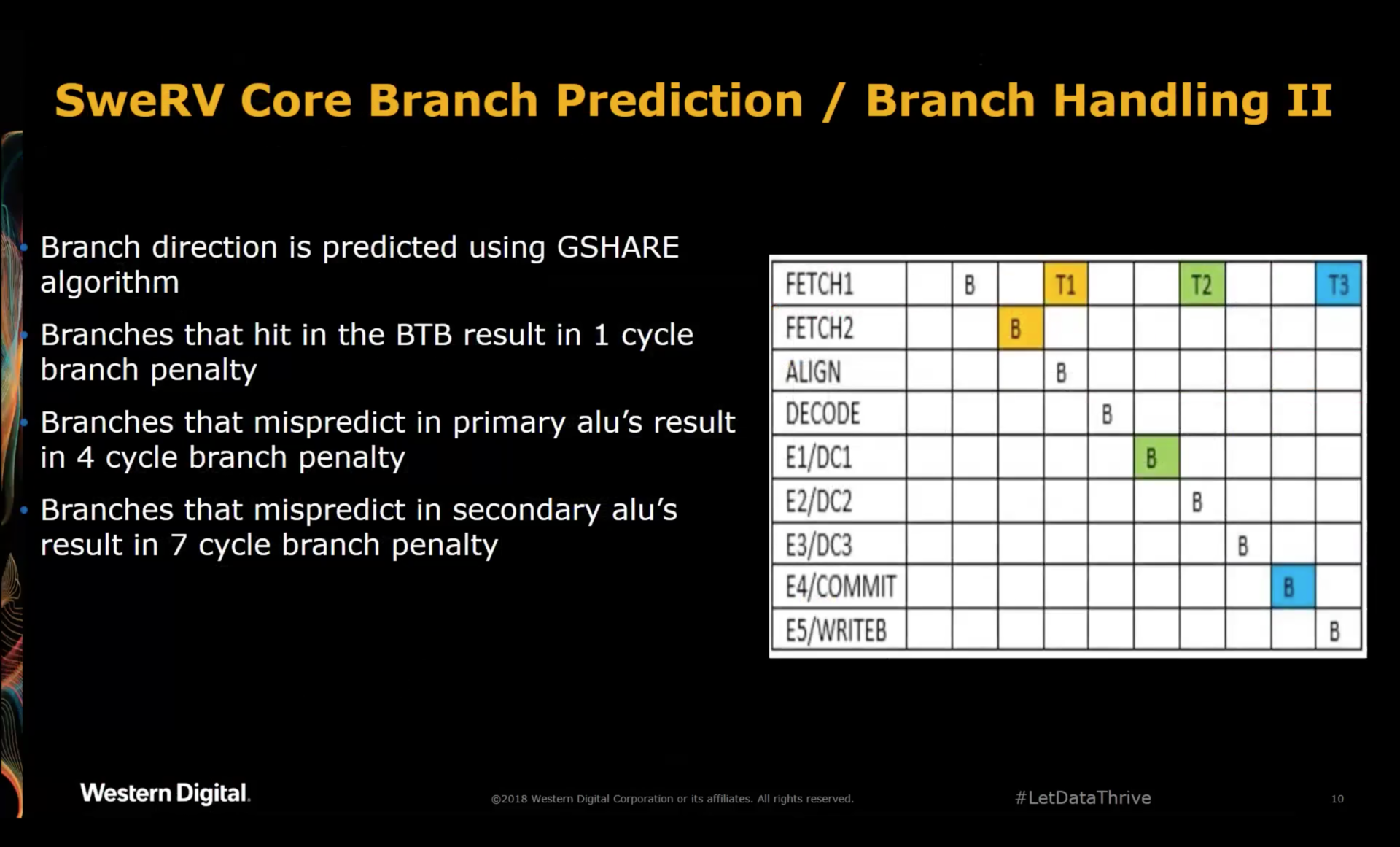 The biggest negative consequence of the retry ALU is the fact that mispredictions that are only apparent after EX4 result in a 7 cycle branch penalty! 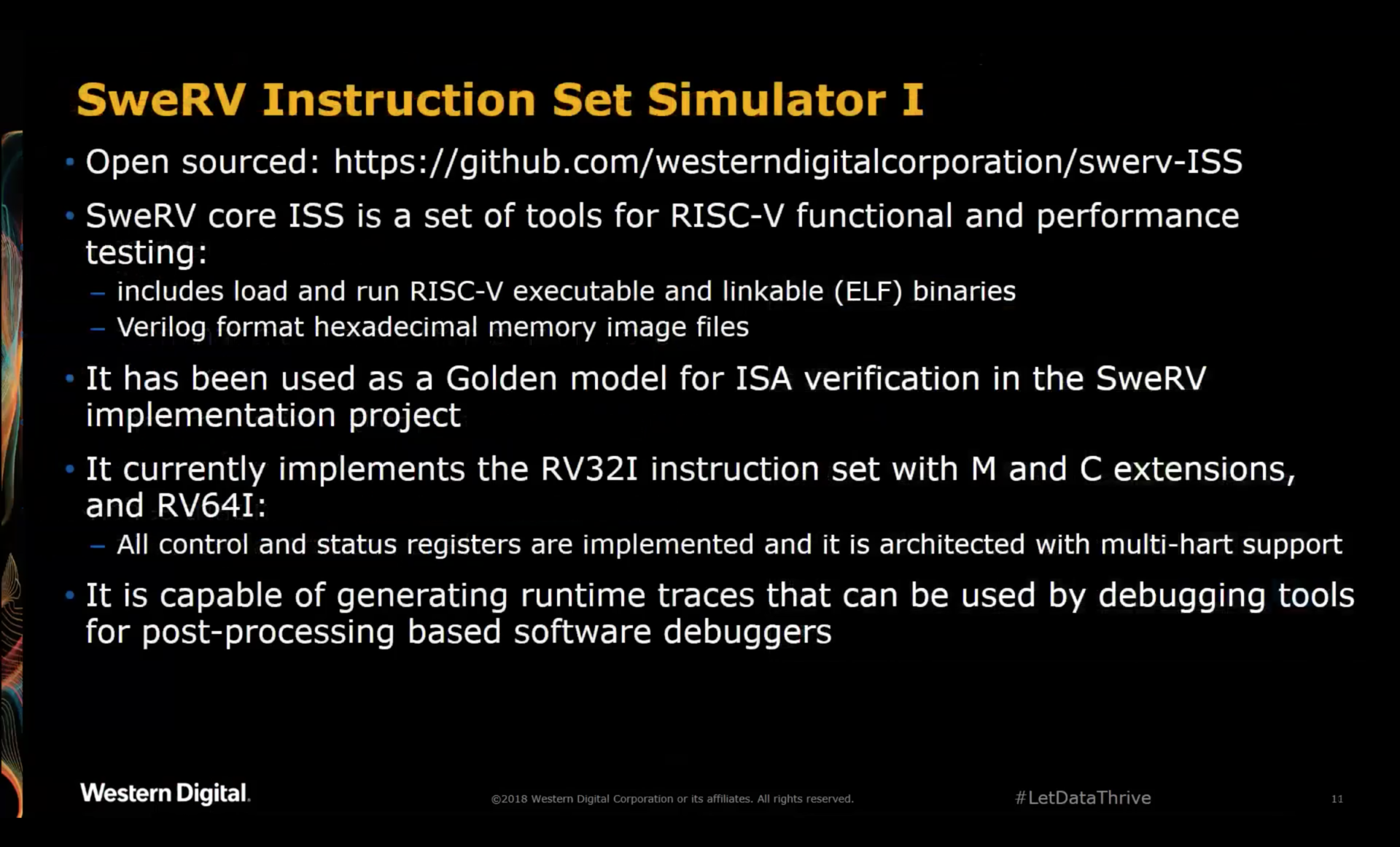 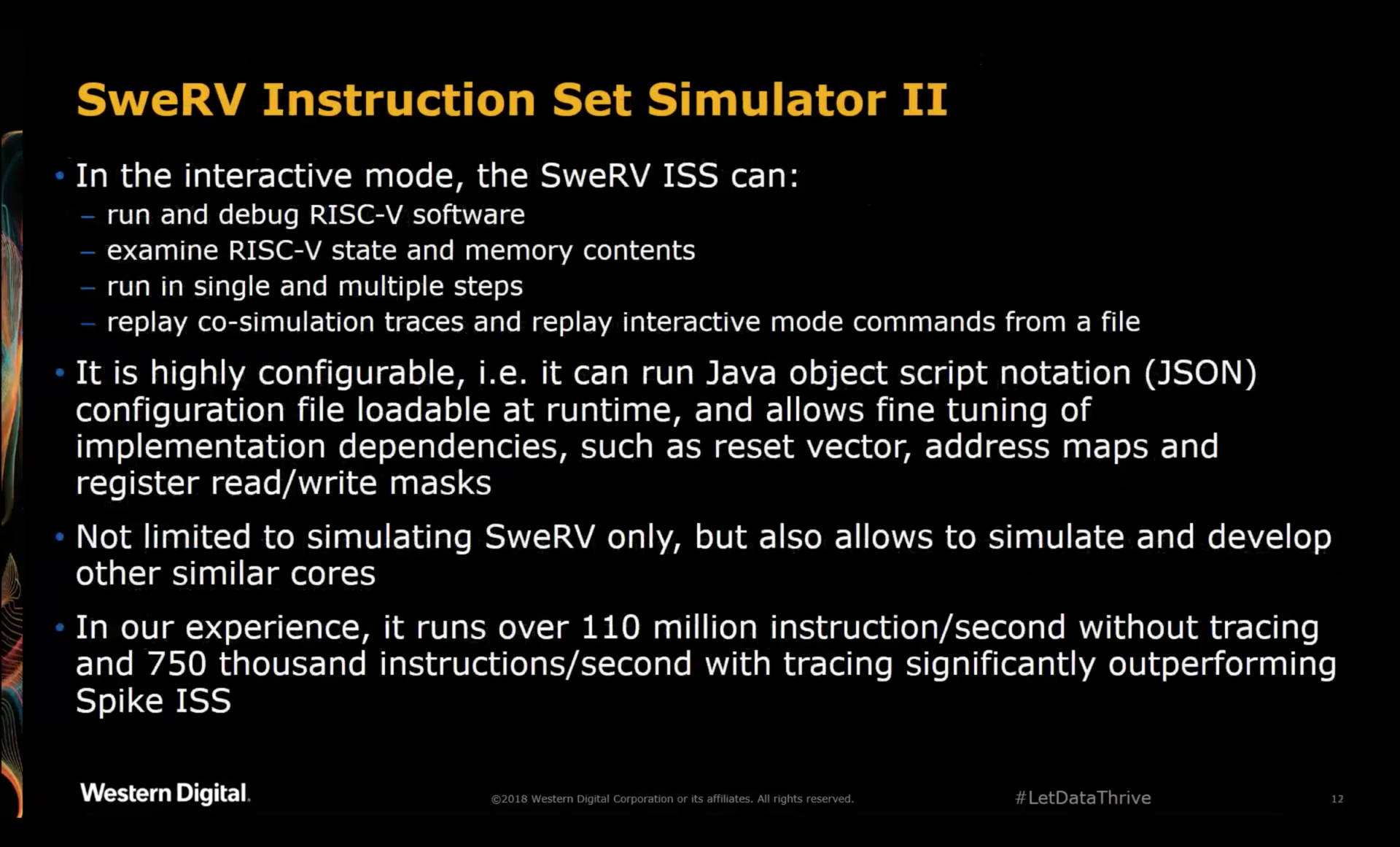 In addition to the SweRV RTL, Western Digital also open sourced their instruction set simulator. Not too much additional detail was given than what was on the slides.

They decided to write their own ISS instead of using Spike because Spike didn’t exactly fit their needs. They have many man-years of experience doing ISS. Getting this one up and running only took about a week.

The ISS can easily be modified for different cores.

The source code is here.

Since the ISS is used to generate traces that are used to verify the RTL, I was wondering if the ISS also has all the microarchitectural details (the superscalar nature etc.) So far, I’ve not been able to identify where this is specified. 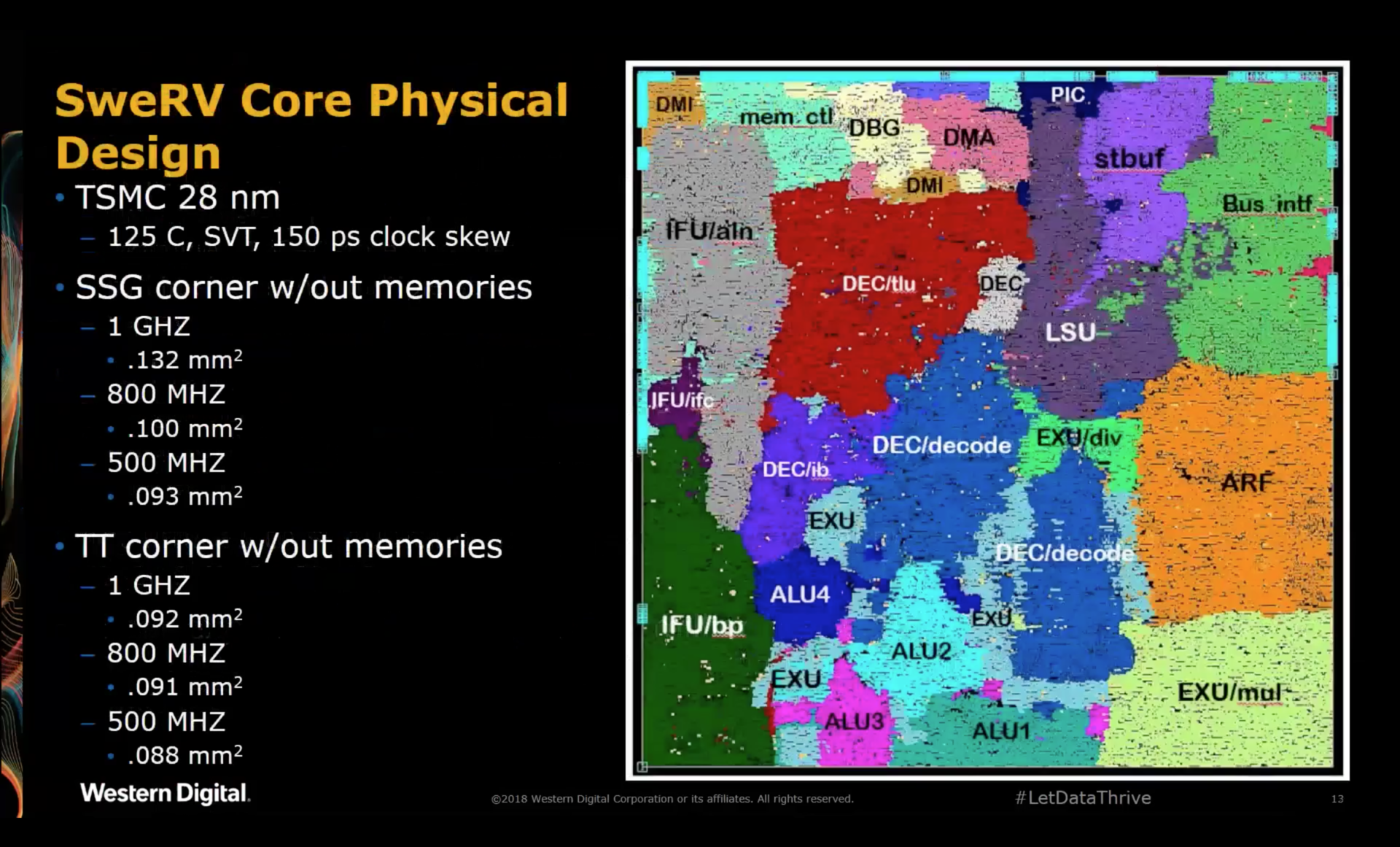 According to the presenter, legal told him to remove the labels on the individual regions, but the same slide was presented, with labels, at the RISC-V workshop, so I think it’s all good. :-)

The initial budget was 0.180 mm2 for the core (without RAMs). The final result is well below that.

A CoreMark score of 4.9 CM/MHz is excellent, but already stale: with additional optimizations, their number now stands at 5.0.

Going higher than that would require a significant investment in terms of logic and branch prediction.

As mentioned earlier, the SiFive E76 core claims a score of 4.9 CM/MHz as well with an 2-way superscalar 8-deep pipeline. The Core Complex Manuals of various SiFive cores can be found here.

Like the SweRV, the E76 also gives arithmetic instructions a retry opportunity, since they can be executed either in the AG stage or the M2 stage.

All in all, the E76 and the SweRV are very similar, with very similar performance as a result. 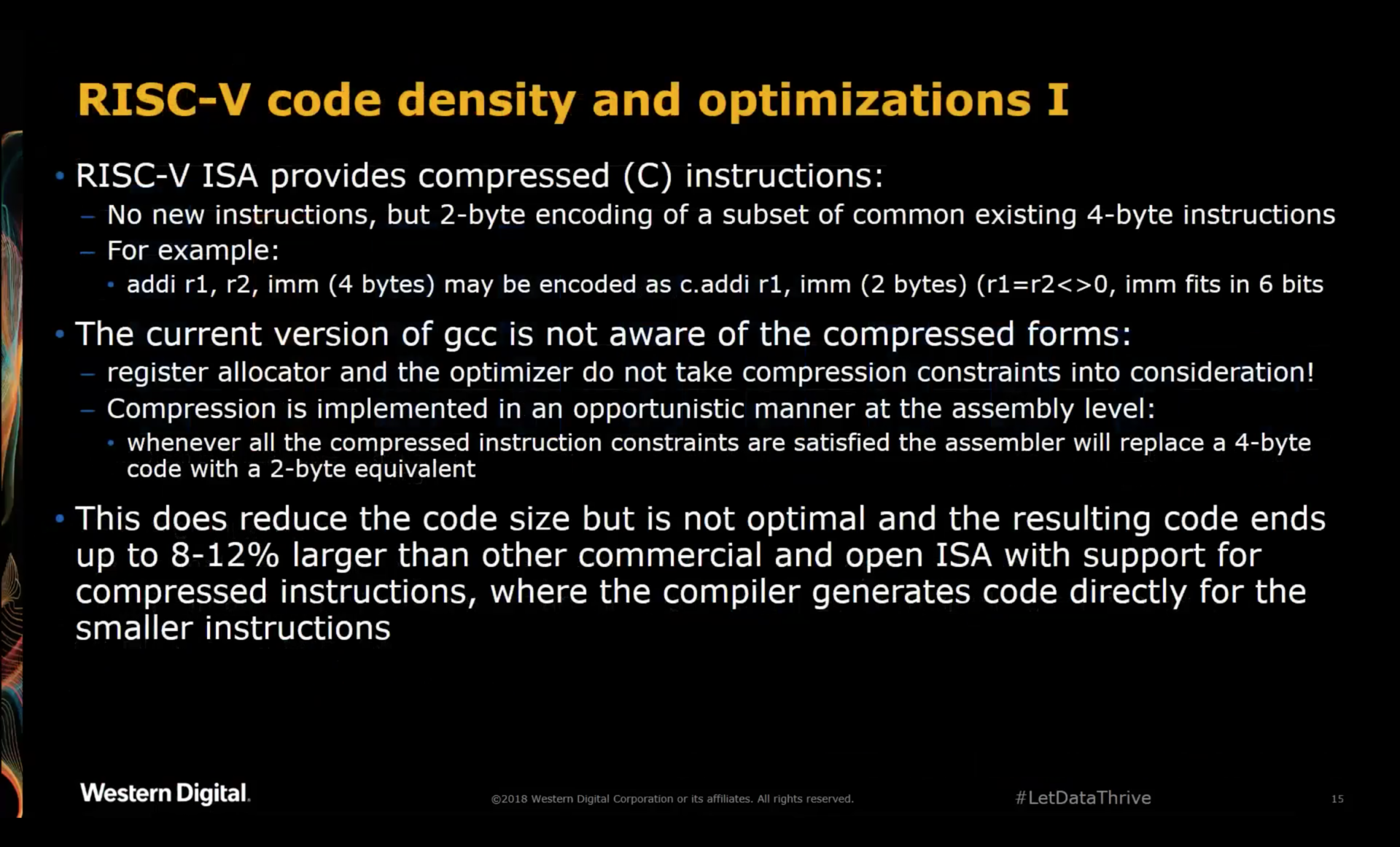 Because of the inefficient way in which GCC currently generates compressed instructions, code density isn’t as good as it should be, with binaries that are between 8 and 12% larger than their previous CPUs.

They are working with the RISC-V consortium to improve GCC’s compressed instruction generation. Code will be upstreamed, of course.

Meanwhile, they are using compiler flags to reduce code size: 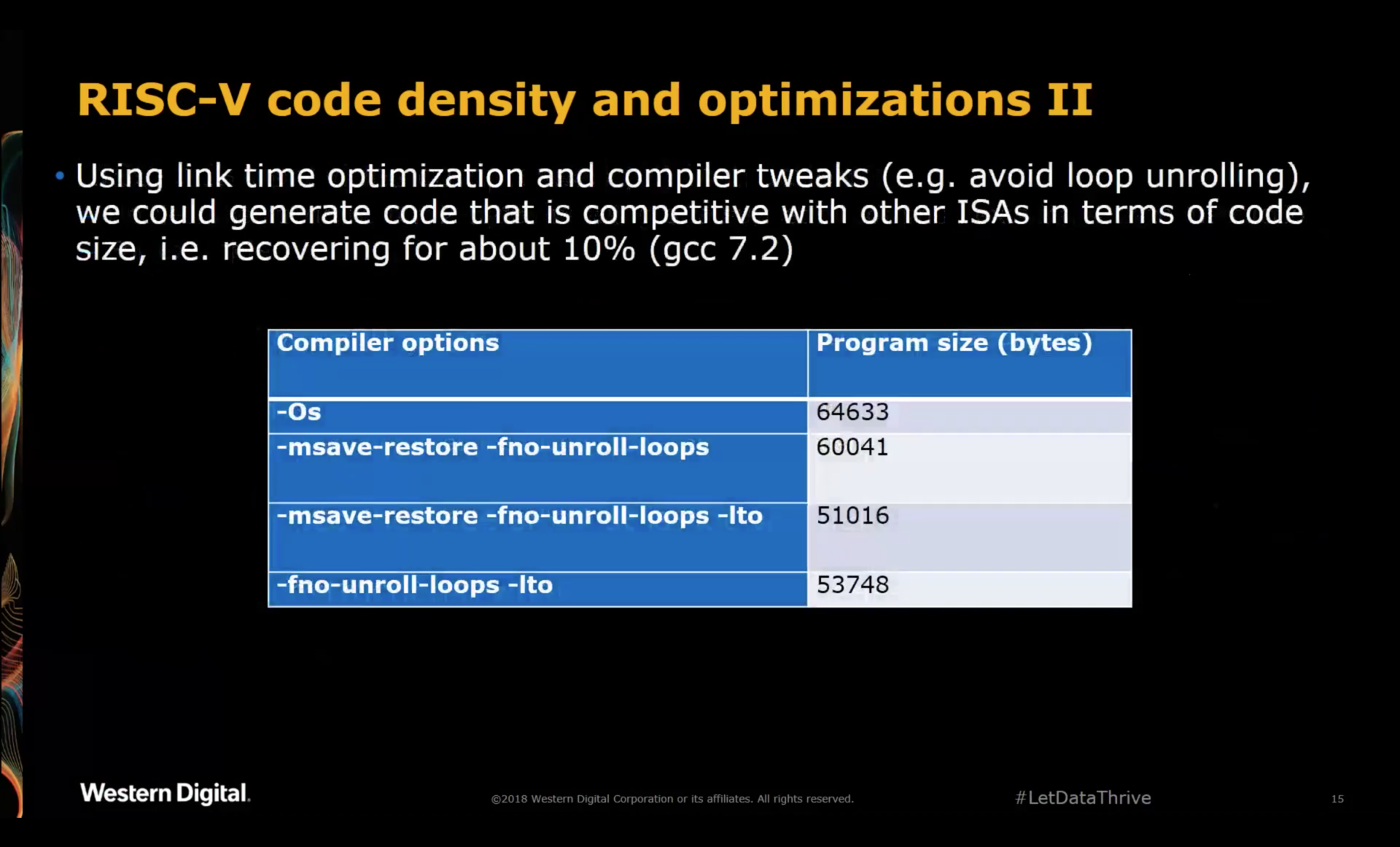 In the numbers above, the original RISC-V code size is 64KB, compared to 51KB for their older chips with commercial CPU. (They don’t use GCC for that CPU.)

With additional compiler options, they can recoup most of the code size: 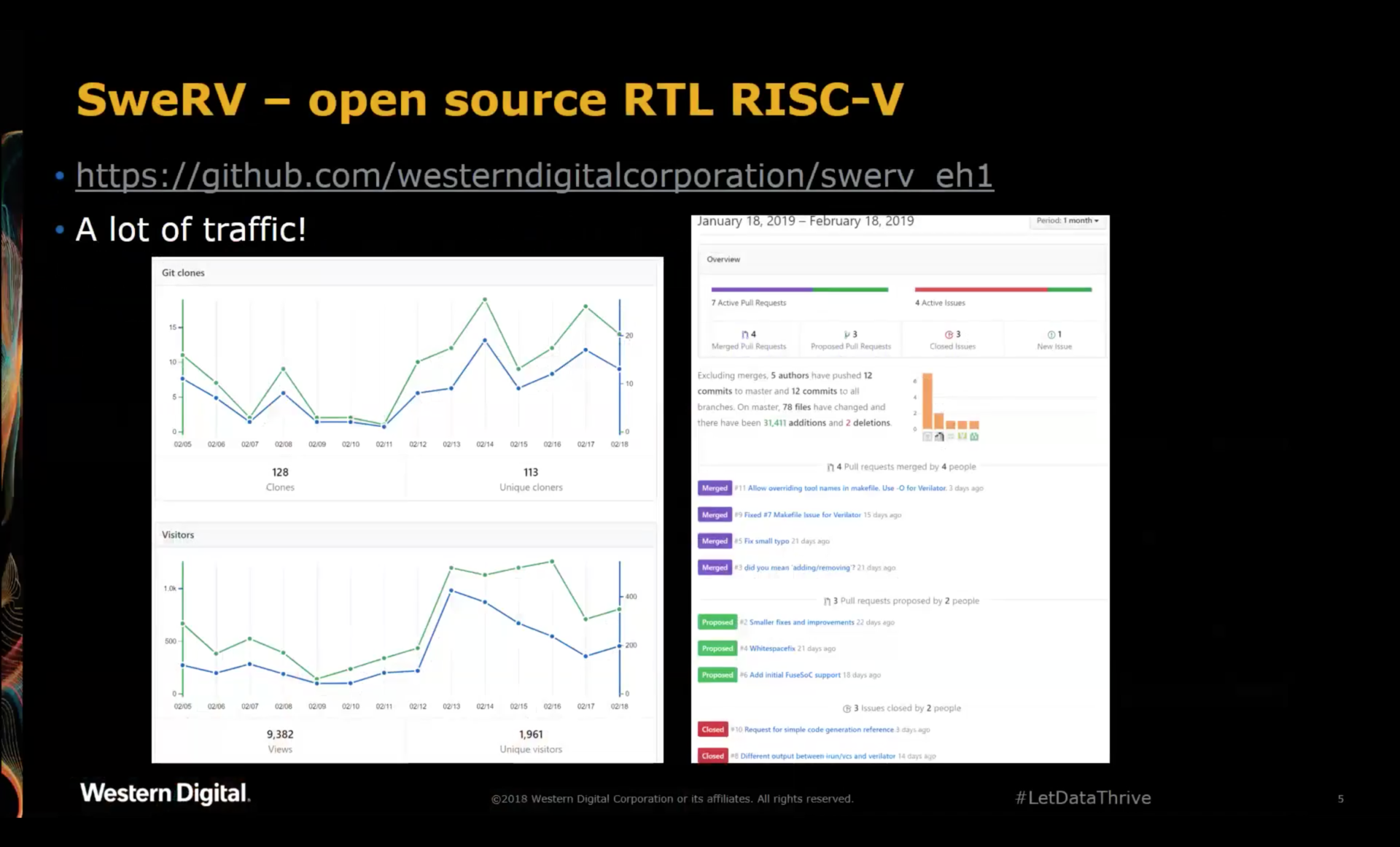 They saw a lot of interest after the public release. One question is how to deal with pull request and how to integrate that with their internal design flow. 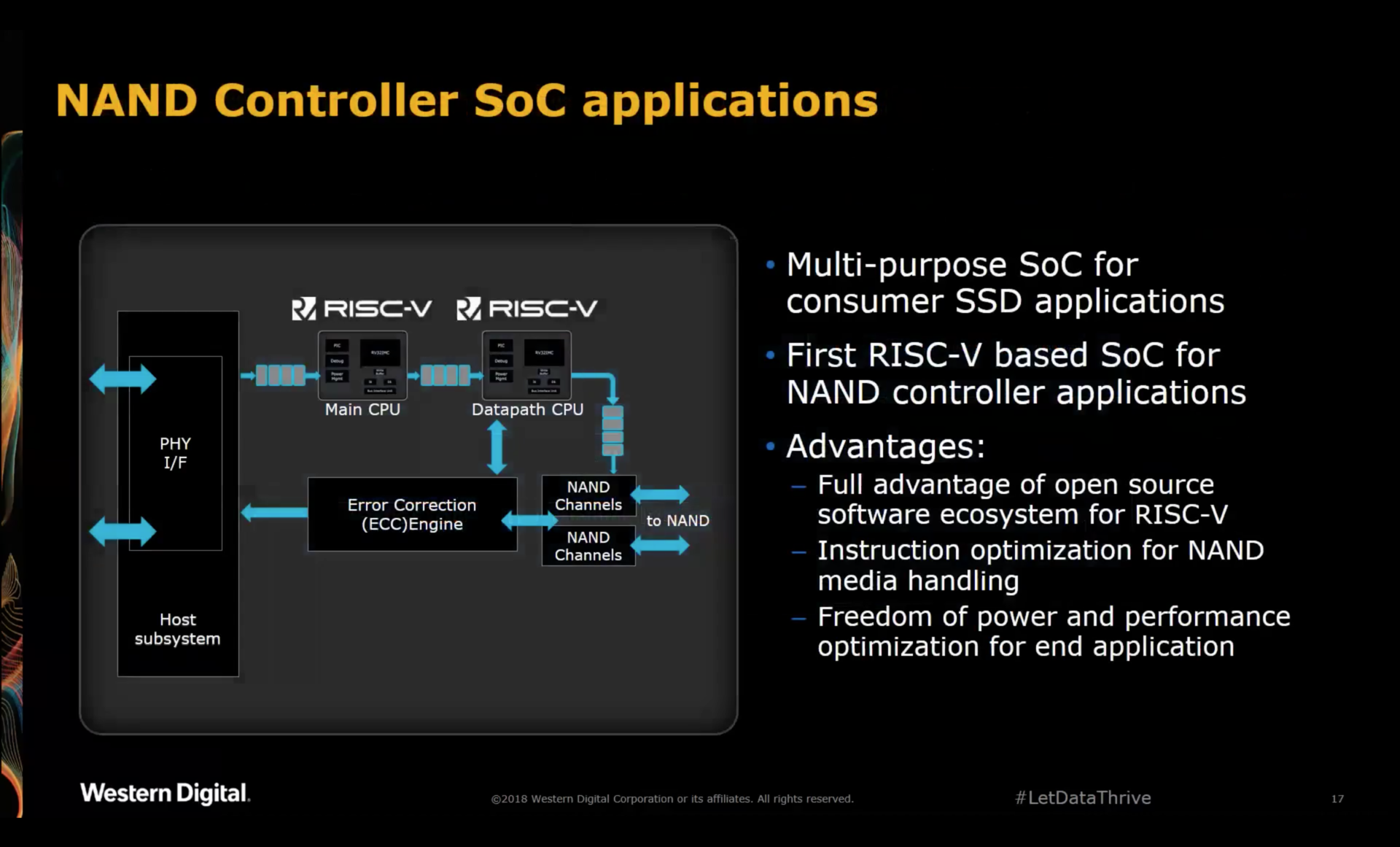 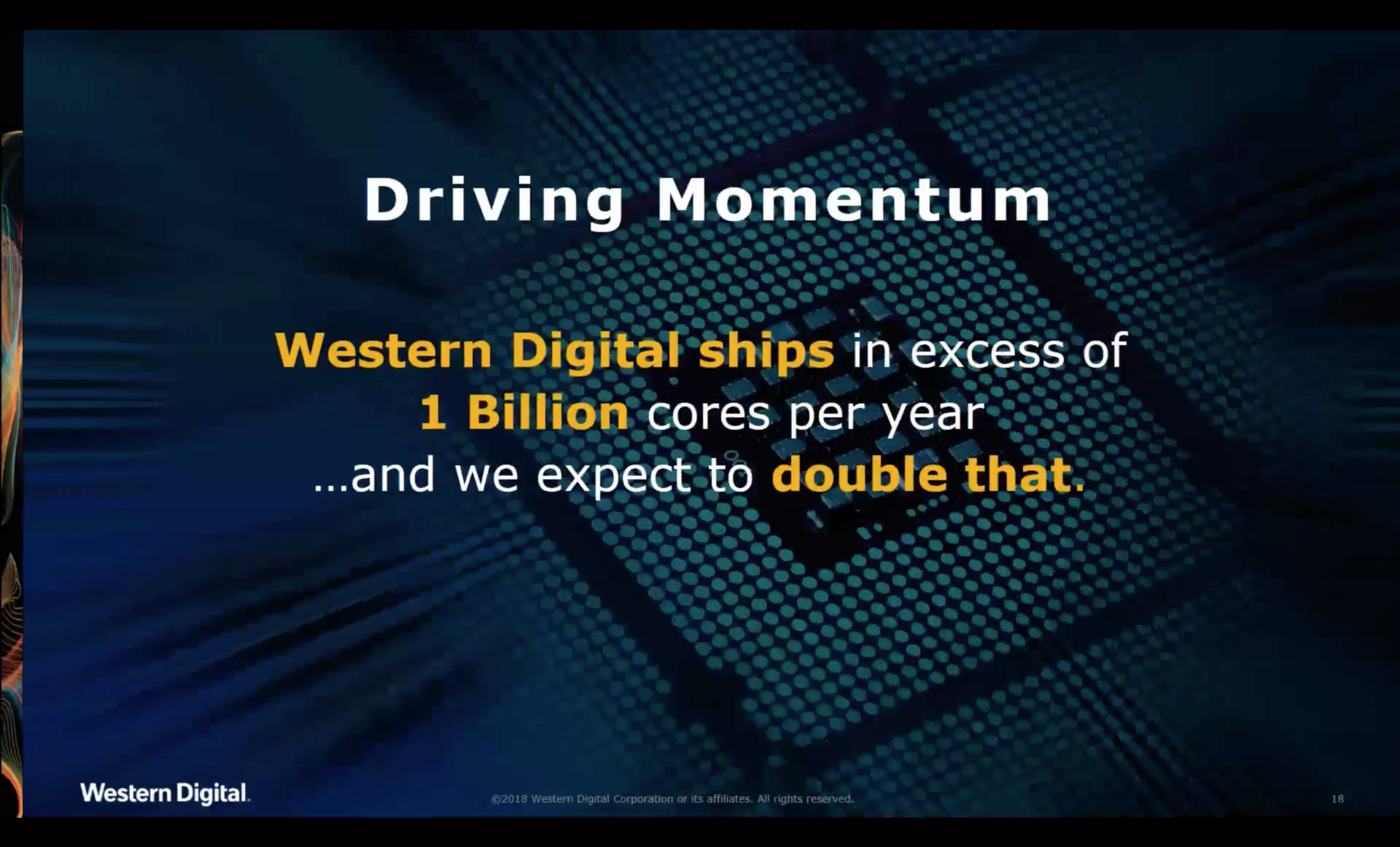 SweRV for Hobby Use?

I’m still in the early stages of going through the SweRV RTL and ISS, but it’s clear that SweRV is not a good fit to stick in an FPGA for hobby projects:

After the presentation, I asked about formal verification of the core. Zvonimir confirmed that they used formal methods at a later stage and that “they found some nasty bugs”. The code that was released on GitHub has no signs of Clifford Wolf’s RVFI interface that is defined in the riscv-formal project, so it’s not clear what kind of test suite was used to verify the correctness.

When you have a look at the SweRV architecture and implementation, it is not incredibly complex, especially compared to, an out-of-order triple-issue A-15 core. And yet it achieves similar or higher CoreMark/MHz scores. Is this because of the memory system, where most CoreMark measurements are done with a DRAM system instead of fixed latency on-chip SRAM? But even if we stay within the RISC-V family and compare against the Boom v2, with the similar scores, but also a much more complex OOO architecture (requiring, for example, a 9 read port/3 write port register file), the score is remarkable.

I’d love to learn more about that!

I would like to thank the Bay Area RISC-V Group for organizing this deep dive, and Western Digital for hosting the meeting, providing the content, and releasing the source code on GitHub!