There are hundreds of FPGA development boards out there, and I don’t dare to count but I must own a considerable fraction of them. Most of these are designed deliberately for development purposes, but a few are not, and yet they can sometimes be a good match.

One board that falls in this category is the Colorlight i5. 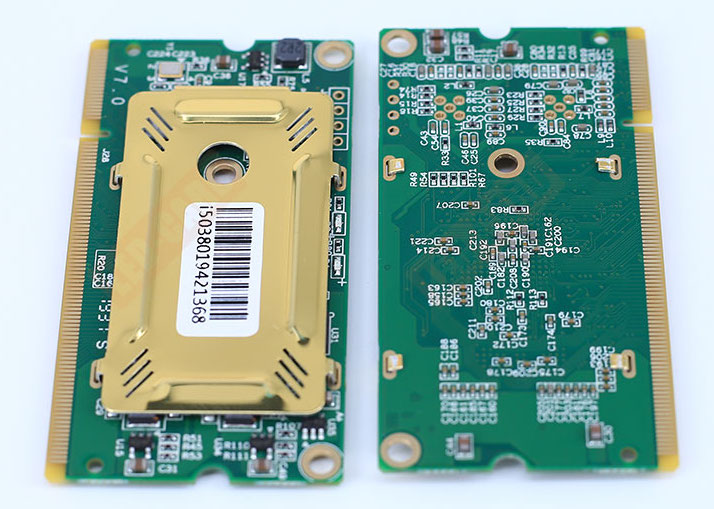 Like other members of the Colorlight family (the Colorlight 5A-75B comes to mind), the i5 is ‘real’ product that is designed for one specific purpose: it is a controller for large LED video panels. And that’s a huge plus, because in FPGA land, high volume means low cost, usually much lower than buying individual components on Digikey or Mouser.

The Colorlight i5 is especially attractive because it’s a plug-in card, with a reappropriated DDR SODIMM connector. Even better is that nothing about this module seems to be tailored specifically for LED panels. Unlike the 5A-75B, there are no unidirectional 3V3 to 5V level shifters: FPGA GPIO pins are routed straight to the SODIMM connector and can be used any way you want: input or output, LVCMOS or LVDS or any configuration that’s supported by the FPGA.

The Colorlight i5 uses a Lattice ECP5U-25, an FPGA that’s supported by the Yosys/NextPNR open source tool flow, an extra bonus. The board is also supported by recent versions of Icestudio.

That said, there’s still a hurdle to using this board as development platform: you need a way to power it, there are no easy usable GPIO connectors (such as PMOD connectors), and while are easily accessible test JTAG points to program the FPGA, you still need an external JTAG programmer and solder a bunch of wires to make things work.

you could go to the AliExpress webstore of Muse Lab and buy their Colorlight i5 development board. 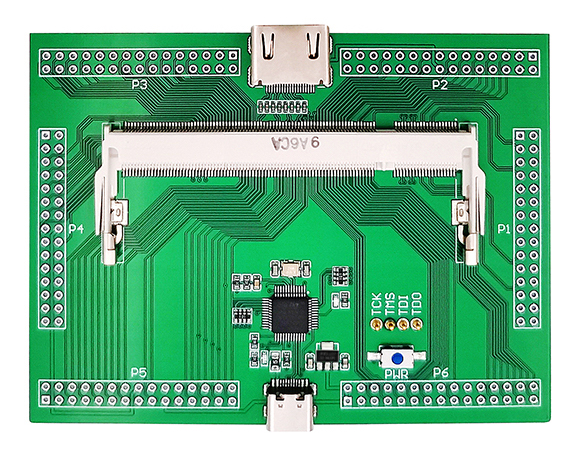 Muse Lab also sells a number of other interesting hobby FPGA boards, such as the ICE40 UP5K based iCESugar, but the ECP5 FPGA on Colorlight i5 has a much larger capacity, so I bought their module + development board combo for $50 and gave it a try.

The Colorlight i5 Module

Skip to From Unboxing to Blinky if you want to get your hands dirty ASAP.

Let’s first go over characterstics of the module itself: 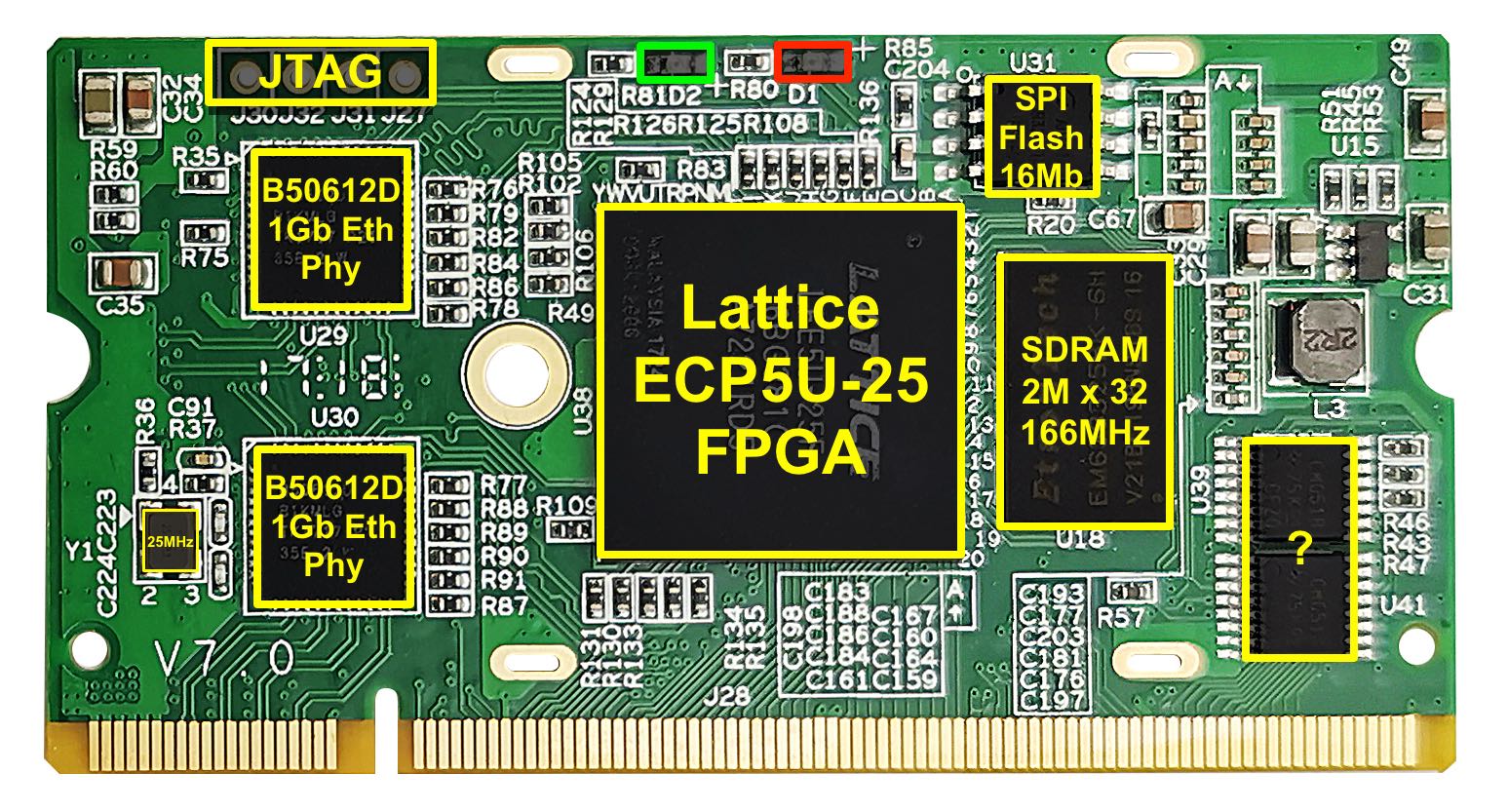 There’s a lot to work with here. What’s even better is the potential for future upgrades: Colorlight has i6, i9, and i9+ modules with the same SODIMM pinout as the i5, but with larger FPGAs: the i9 board has a Lattice ECP5-45. The i9+ a Xilinx Artix A50T.

For the i5 board, V6.0 and V7.0 are pinout compatible too, with the exception of the mystery pins.

Features of the Muse Lab Development Board 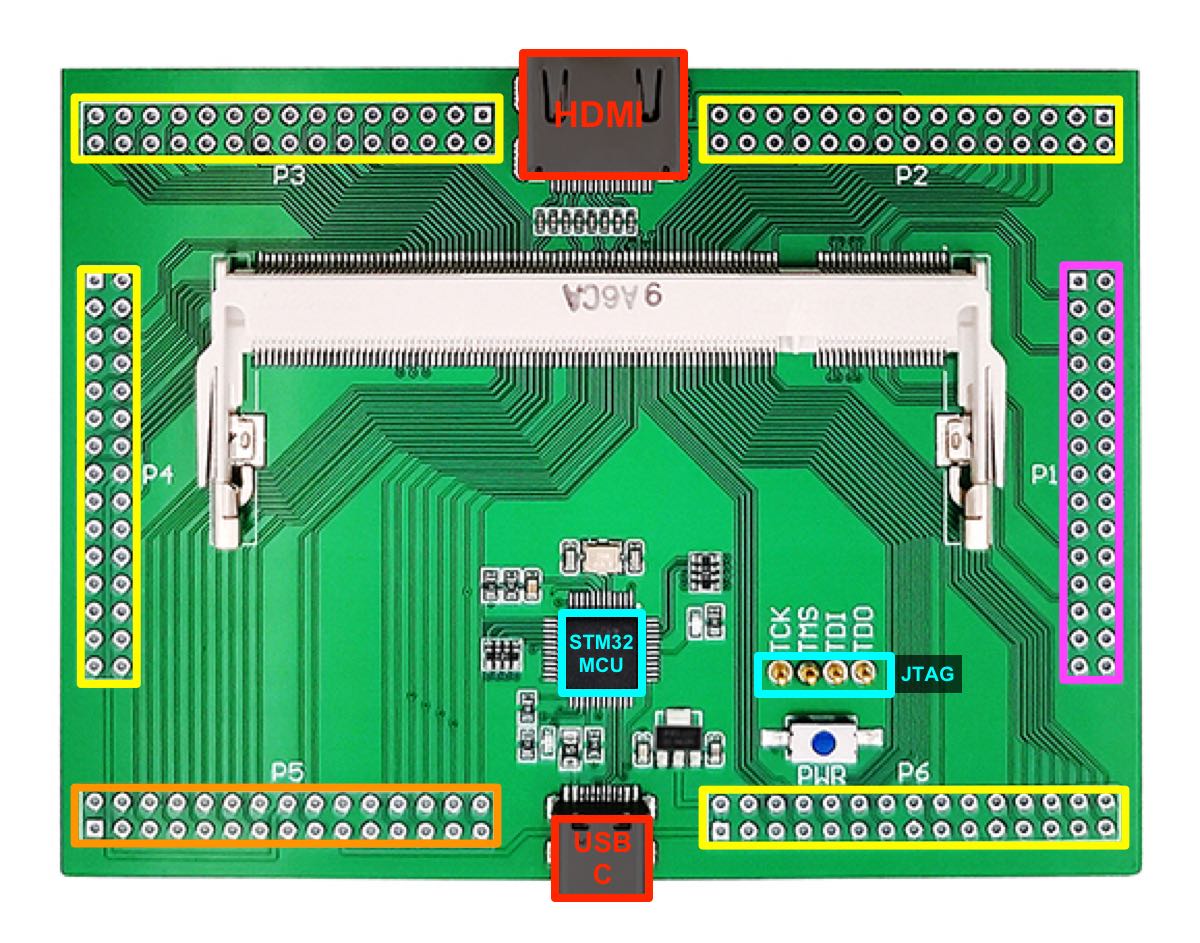 It has the following features:

The package arrived with the i5 module (V7.0), the development board, a USB C cable, and 6 30-pin connectors that you need to solder yourself. 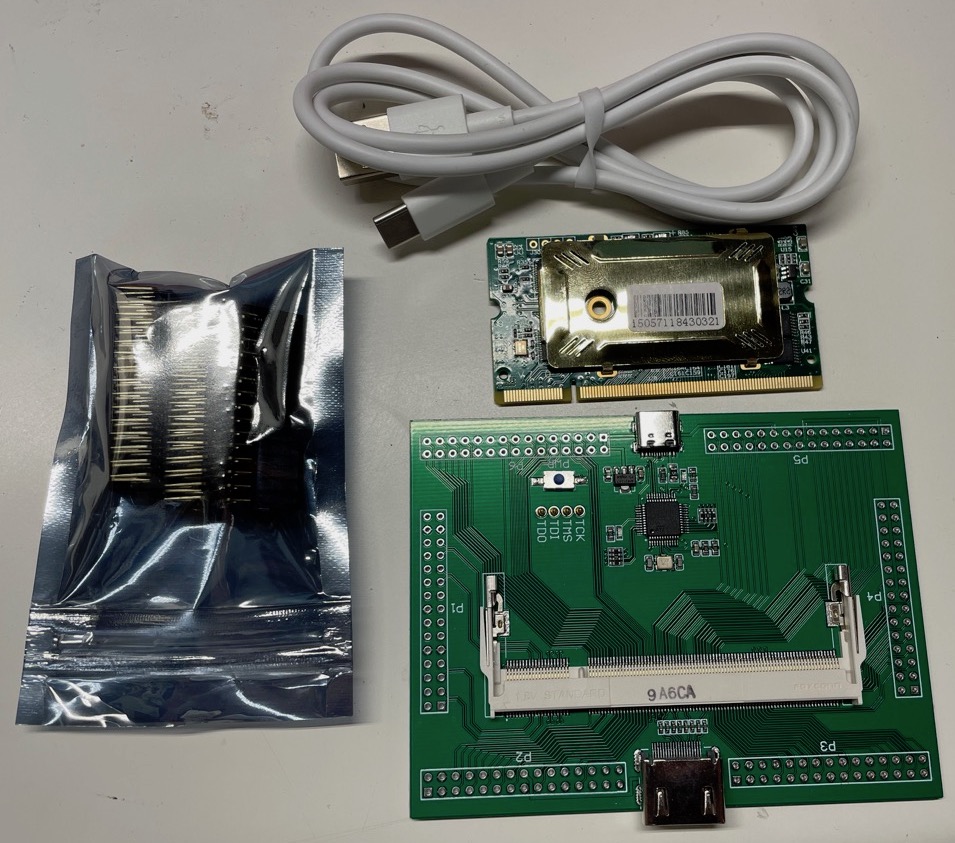 I’m not well qualified to judge the quality of the PCB, but it looks well made to me.

After inserting the 30-pin connectors into the PCB (it’s a bit of a hassle that requires wiggling slightly bent pins in the right hole), I noticed a minor issue: my HDMI cable doesn’t fit between the 2 30-pin connectors that surround the HDMI connector. As a result, the cable can’t be plugged in completely:

You need a HDMI cable with a narrow connector to make things work, or don’t solder connectors P2 and P3, which is what I did.

The box doesn’t contain any documentation, not even a leaflet with a URL. You have to make do with Google or a link on the AliExpress product page to a GitHub repo.

Without further instructions, I plugged the USB cable into the board and my PC, some LEDs came up and I heard a little sound: my PC told me that it had seen a new “DAPLINK” USB drive. So far so good!

I didn’t find any use of this USB drive. It’s supposed to enable flashing a binary through simple drag-and-drop, but that functionality doesn’t work for this board.

As I write this, there are 2 main sources of information about the development board:

I’ve reverse engineered and brought up a number of FPGA boards that didn’t have any documentation at all, so getting a Colorlight i5 to work with at least some documentation wasn’t an issue, but it’d be a challenge for a beginner or somebody less experienced.

What follows are my notes on getting from unboxing to running an LED blinky, with all steps explained along the way.

From Unboxing to Blinky

The normal sequence of things is to go from Verilog to synthesis to place-and-route to loading a bitstream.

However, since the official GitHub repo already contains demos with prebaked bitstreams, I will start with loading one of those first.

The official GitHub repo suggests using OpenOCD and their own tool dapprog to load bitstreams and program the SPI flash. I’m using Adam Greig’s ecpdap instead: it has more features, it’s easier to use, and it’s faster.

ecpdap is a tool that makes your PC talk to the STM32 controller on the development board. It uses the CMSIS-DAP protocol to download bitstreams, erase the i5 SPI flash, program the flash etc.

The ecpdap repo is here. You can compile it from source (it’s written in Rust), or you can download a binary release, which is what I did. Make sure you use release v0.1.5 or later. Earlier versions didn’t play well with the Colorlight development board.

Move the ecpdap to some location in your $PATH of your choice, such as /usr/local/bin.

Step 3: Get everything ready for use

Step 4: Verify that ecpdap can talk to the board

Check that ecpdap can find the ECP5 FPGA:

Step 5: Load a blink bitstream to the FPGA

The prebaked bitstreams are located in the ./Colorlight-FPGA-Projects/demo/i5 directory.

If all went well, you’ll now see the green LED on the i5 PCB blinking!

I’m absolutely not wild about the time it takes to download a bitstream to the FPGA. 26KB/s is very slow but it’s unfortunately about as fast as you can go with the CMSIS-DAP v1 protocol that’s supported by the firmware of this board.

I’ll talk later about how to reduce this time for most of your designs.

Programming a Bitstream into SPI flash

In the previous section, a bitstream was loaded directly into the FPGA. After a power cycle, the blinky will be gone. To make the board power up with the blinky, we need to program the bitstream into the SPI flash of the Colorlight module.

By default, the SPI flash on the Colorlight module has its protected mode enabled. As long as this is the case, you can not reprogram it with new content.

Removing the protection used to be a hassle (it required loading a custom Litex bitstream and entering some commands over the UART), but with ecpdap, things are much easier.

Let’s first use ecpdap to check the status of the flash:

The next to last line shows that the write protection bits are set: BP0: true, BP1: true, BP2: true.

The flash will stay unprotected indefinitely, so you need to do this step only once.

If you ever feel the need to protect the flash again, you use ecpdap flash protect.

Step 2: Program the bitstream into the flash

When you powercycle the FPGA, by pressing the PWR button on the development board, or by replugging the USB cable, the green LED should be blinking right away.

There are a few other demo bitstreams.

This bitstream sends a 640x480/60Hz test image to the HDMI connector. 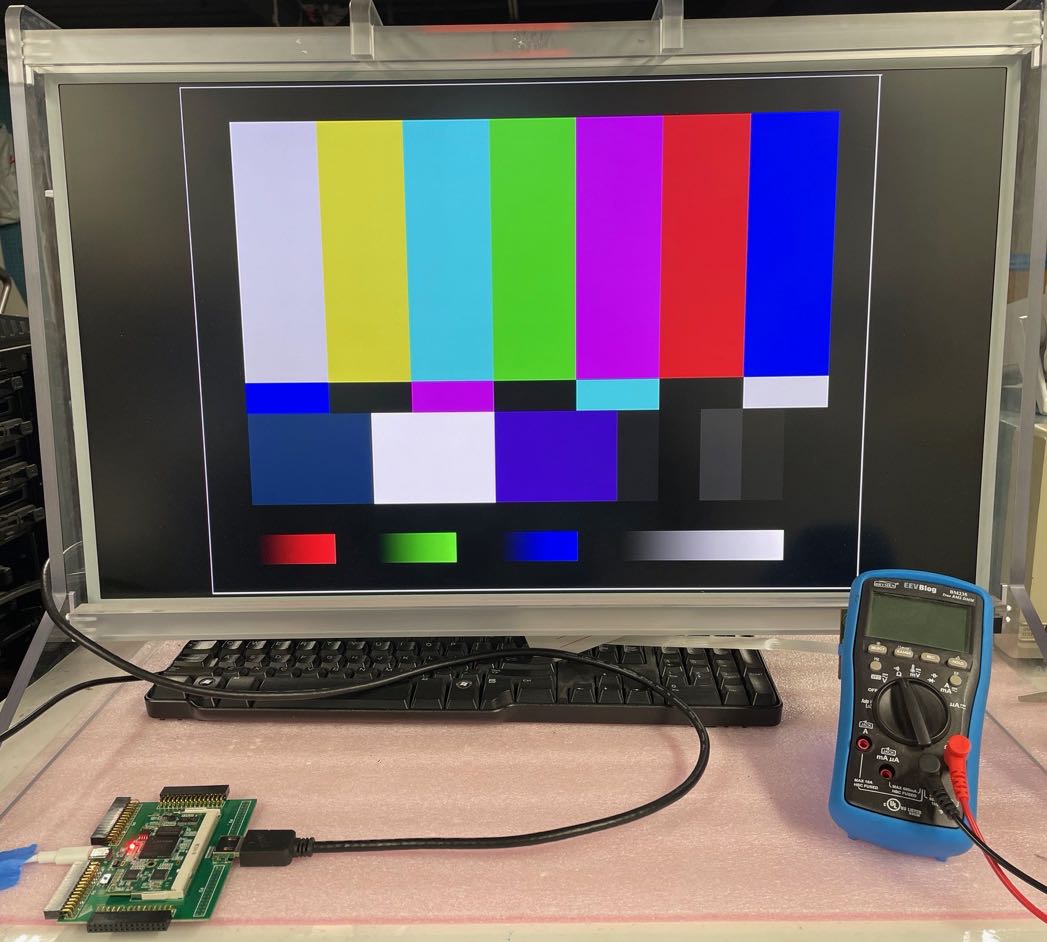 Litex is a powerful SOC RTL builder. The litex_with_dram.bit bitstream contains a VexRiscv RISC-V CPU, an SDRAM controller, and some kind of BIOS to boot a secondary image over Ethernet or over the serial port.

The provided bitstream has the UART programmed at 38400 bps.

Where you’ll catch the Litex BIOS messages will depend on how fast you started the terminal after loading the bitstream. But at some point, you should see the litex> prompt.

If you want to see the full boot sequence, either start picocom in a different terminal window before loading the bitstream, or enter reboot at the prompt.

I did the latter, and was greeted with the following:

Litex itself is worth a few articles, but out of scope for this getting started blog post.

What’s important here is that the bitstream allows you to check the DRAM is working, and to verify that the UART pipeline from PC to FPGA is functional.

From Verilog to Bitstream

Finally, after playing around with prebaked bitstreams, it’s time to compile our own.

If you’re lucky and don’t run into compilation issues, the process is pretty straightforward.

You need Yosys, Project Trellis, and NextPnR-ECP5 to go from verilog to bitstream.

If all went well, you’ll see a lot of text scrolling over the screen, which will end with something like this:

You will also find a new blink.bit file waiting for you. Load to the FPGA with ecpdap as explained earlier.

Congratulations! You’ve cleaned the pipe from Verilog all the way to a working FPGA design!

Using the Board for Your Own Projects

It’s one thing to compile an existing project, it’s another to create one yourself. As a test, I ported my SPDIF PMOD design from an Intel MAX10 to this development board. 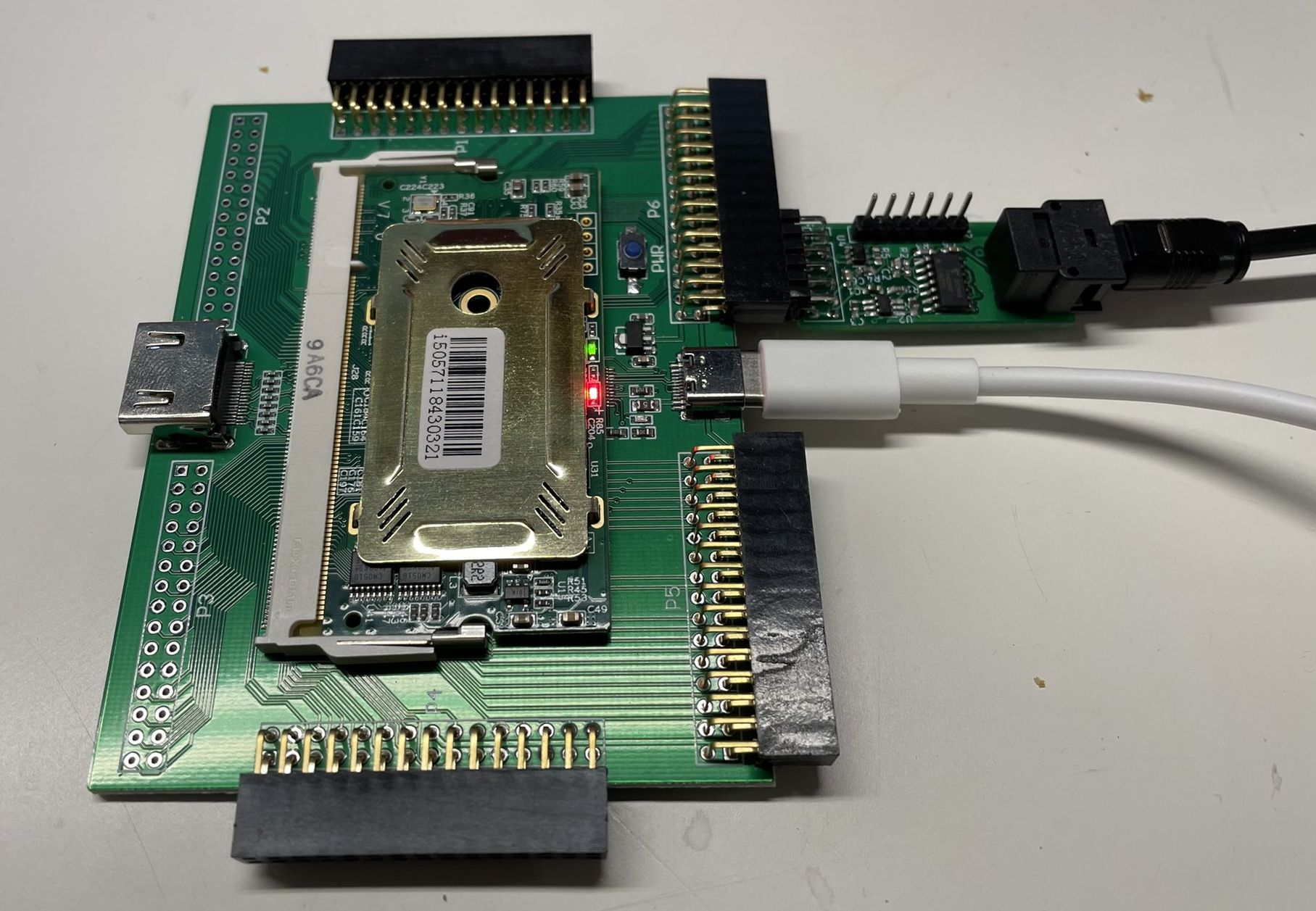 The Colorlight i5 specific changes were minimal.

I really like the Colorlight i5 + development board combo. The FPGA is large enough for interesting projects, it’s perfect if all you need is an FPGA, DRAM, and a lot of IOs. It’s supported by open source tools. The HDMI output is a nice bonus. And, most of all, at $50, it’s cheaper than anything else in its class.

The only negatives are documentation that’s lacking, and the absence of interfaces like Ethernet, SDcard, etc. If you want those, you’ll need to add expansion PMODs, or you can switch to a ULX3S development board… at a significantly higher price.